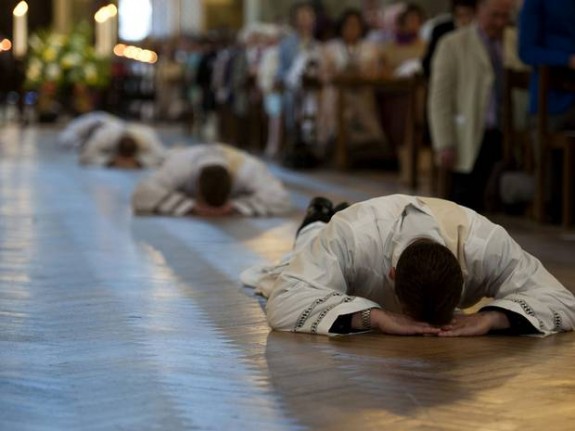 Some happy news from across the pond:

A few years ago he was a roadie with a band, living what he admits was a rock’n’roll lifestyle. Today, 42-year-old Rob Hunt is training for the Catholic priesthood in a seminary in central London. It’s a very different way of life from what he’s been used to.

Having been raised a Catholic, he stopped going to Mass for a long time. There were, he says, “a few relationships”, including one with a married woman. It was what changed his life. “I was stung back into belief,” he says. “It was as though someone said to me: you’ve got to think about how you’re living your life.”

The rethink that followed brought Mr Hunt to Allen Hall in London’s Chelsea, one of the four remaining Catholic seminaries in Britain, where he is one of 51 men studying for the priesthood. His story features in Catholics, a new BBC series starting this week, which lifts the lid on how priests are trained. In the film, Mr Hunt’s room in the seminary is shown, its walls covered with pictures of St Thérèse of Lisieux and the Virgin Mary. “In the past, you would have found slightly different women on the wall,” he says.

The documentary paints a picture of a life that borders on monastic. But another of those featured in the film, 26-year-old Mark Walker, who’s in his fifth year at the seminary and who expects to be ordained in summer next year, says it’s not all it seems. “You’re living in a mostly male environment, but there’s plenty of freedom to come and go,” he says.

Mr Walker says that, though the celibacy he must embrace as a priest seems strange to many, it’s not too difficult to accept. “There’s a belief that a good sex life is essential, that it’s what you need to make you happy,” he says. “But it’s not that your sexuality is turned off once you’re ordained, but you learn to fold it into the rest of your life.”

Mr Walker says he “always had a nagging thought” that the priesthood would be the right path for him. He was raised a Catholic, and it was on the day of his first communion, at the age of seven, that a priest suggested that he might have a vocation. “It planted an idea in my mind that never quite went away,” he says.

Father Christopher Jamison, director of the Catholic Church’s National Office for Vocation in London, says that although the number of men enrolling in seminaries hit an all-time low at the start of the 21st century, it is now significantly on the rise.

The rise in seminarian numbers has been due in part to the setting up of “discernment groups” for Catholic men and women, Fr Jamison says. “It’s not about straightforward recruitment into the religious life. It’s about helping both men and women work out what’s right for them in their lives.”

February 19, 2012 What happened when a church opened its doors during the Super Bowl
Recent Comments
0 | Leave a Comment
Browse Our Archives
Follow Us!