“We were getting killed”: the inside story of Obama’s “accommodation”

“We were getting killed”: the inside story of Obama’s “accommodation” February 10, 2012 Deacon Greg Kandra 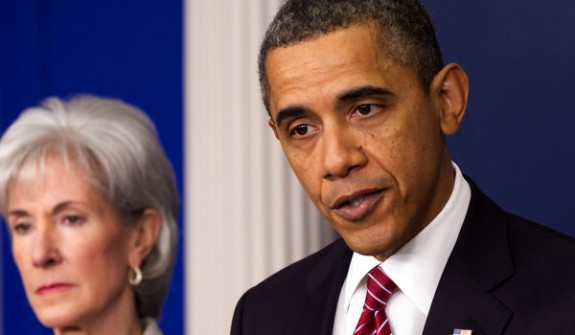 For the White House, the decision announced Friday to soften a rule requiring religious-affiliated organizations to pay for insurance plans that offer free birth control was never really driven by a desire to mollify Roman Catholic bishops, who were strongly opposed to the plan.

Mr. Obama announced that rather than requiring religiously affiliated charities and universities to pay for contraceptives for their employees, the cost would be shifted to health insurance companies. The initial rule caused a political uproar among some Catholics and others who portrayed it as an attack on religious freedom.

Meeting with his top advisers in the Oval Office last week amid rising anger from Catholic Democrats, liberal columnists and left-leaning religious leaders — a fed-up Mr. Obama issued an order meant for Kathleen Sebelius, the secretary of health and human services. Ms. Sebelius and agency lawyers had initially told the president they needed a year to work out a compromise that had seemed obvious to some in the administration from the start: make the new rule more like that offered by the State of Hawaii, where employees of religiously affiliated institutions got contraceptives through a side benefit offered by insurance companies.

But in difficult internal negotiations, a group of advisers had bested Vice President Joseph R. Biden Jr. and others and sold the president on a stricter rule. Now the political furor surrounding it was threatening to consume signs of economic improvement giving a boost to the White House and put the Obama re-election campaign on the defensive.

Time was up, Mr. Obama told his advisers, according to officials in the meeting. Ms. Sebelius, a Catholic who, along with the president’s senior adviser Valerie Jarrett and domestic policy adviser Melody Barnes, had pushed hard for the new rule, was not there, but the message came through: Figure out a way to make something like the Hawaii model work.

In announcing the shift on Friday, Mr. Obama sought to quell the brewing rebellion. Sure, the Republican presidential candidates and the Republican leadership in Congress roundly criticized the administration anyway — and even criticized the compromise, with Speaker John A. Boehner’s spokesman on Friday promising that House Republicans “will continue to work toward a legislative solution.”

Such attacks were not unexpected. What had not been anticipated enough, despite warnings from Mr. Biden; the former chief of staff William Daley; Mr. Biden’s chief of staff, Bruce Reed; and the deputy national security adviser Denis McDonough, administration officials said, was that allies would be furious, too.

Tim Kaine, a Virginia Senate candidate and former head of the Democratic National Committee, echoed the concern of Sister Keehan, president of the Catholic Health Association, that it went too far. So did some liberal-leaning Catholics in the news media — including Chris Matthews, who called the rule “frightening” on his MSNBC program “Hardball,” and E. J. Dionne, the Washington Post columnist, who wrote that Mr. Obama had “utterly botched” the issue.

Meanwhile, Sister Simone Campbell, executive director of Network, a group founded by nuns decades ago to lobby on social justice issues, warned White House officials that nearly 500 Catholic activists would be in Washington this weekend for a conference, and that if no compromise had been reached by then, all of them would return to their parishes fired up about the contraception mandate.

“We were getting killed,” one administration official said Friday. The White House picked the deputy chief of staff Nancy-Ann DeParle to talk to Sister Keehan about ways the rule could be made palatable. Meanwhile, administration officials were hearing from women’s rights organizations, particularly Planned Parenthood, who warned that they would oppose any compromise that made employees at religious-affiliated institutions pick up the tab for contraceptives.

February 12, 2012 Greetings from sunny Florida
Recent Comments
0 | Leave a Comment
"I think I would have been happier had the CDF handled the nuns the way ..."
Theodore Seeber Vatican challenges “interpretation” of cardinal’s remarks ..."
"Blaming "Islamics" for this is like blaming the Pope for the Holocaust Denial of Hutton ..."
Theodore Seeber One killed, 44 injured in Catholic ..."
"It smacks to me of hyper-sensitivity, a veiled spiritual and intellectual pride, with regards to ..."
J D Pope Francis: “A Christian who complains, ..."
"Oh, no, we never change our mind, and we always agree, even on points of ..."
Ron Chandonia Vatican challenges “interpretation” of cardinal’s remarks ..."
Browse Our Archives
get the latest from
Catholic
Sign up for our newsletter
POPULAR AT PATHEOS Catholic
1