Analyst: Catholics may account for Romney win in Ohio 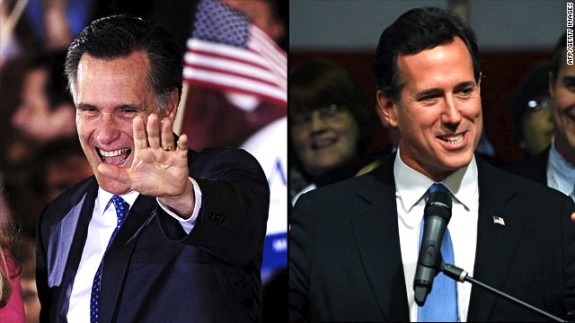 It seems to be the continuation of a trend:

Rick Santorum, a conservative Catholic who is outspoken about faith-based issues, lost Catholic voters by a wide margin in Ohio on Tuesday, potentially a key factor that allowed Mitt Romney to squeak out the narrowest of victories overall in the state.

According to CNN’s exit polls, Romney took 43% of Ohio Catholics on Super Tuesday, compared to 31% for Rick Santorum, and Romney beat Santorum overall by 38% to 37%.

Catholic voters accounted for a third of Ohio’s Republican electorate, the largest share of Catholics in any Super Tuesday state.

“The margin of Romney’s win among Ohio Catholics is surprising, given Santorum’s traditional Catholicism,” says John Green, a political science professor at the University of Ohio. “Romney’s margin among Ohio Catholics – especially in the three largest metropolitan areas – may account for his close win in Ohio.”

Green notes that Romney, a Mormon, has consistently won the Catholic vote in this year’s Republican primaries. That pattern runs counter to speculation that Catholics would focus more on hot-button issues at a time when Catholic bishops are battling the Obama White House over government-mandated contraception coverage.

Romney has denounced the Obama administration’s contraception rule but Santorum has gone further, making social issues a cornerstone of his campaign. Last week, the former Pennsylvania senator said that John F. Kennedy’s 1960 speech in which the then-presidential candidate advocated an absolute separation of church and state nearly made him throw up.

The Catholic vote is one of the largest swing blocs in the country, voting for the winning presidential candidates from both parties in recent elections. But the bloc is so diverse, including many Catholics who differ with church leaders on social issues and many who have drifted from the church, that many religious and political experts dismiss any notion of a “Catholic vote.”

In Ohio, the most contested of the 10 states to cast ballots on Tuesday, Catholics represented one of GOP primary’s main constituencies. Another major bloc, white evangelicals, comprised almost half of the Ohio vote, and broke for Santorum over Romney by 47% to 30%.

March 7, 2012
Joe Biden visits shrine of Our Lady of Guadalupe
Next Post

March 7, 2012 Going for brogue: renewed interest in Irish language at CUA
Recent Comments
0 | Leave a Comment
Browse Our Archives
get the latest from
Catholic
Sign up for our newsletter
POPULAR AT PATHEOS Catholic
1

21 of the Most Dynamic Signs at March...
The March for Life 2022 happened today and people had plenty of...
view all Catholic blogs
What Are Your Thoughts?leave a comment