Take, for example, the Hopkins crew, with three priests and one nun:

At one time, Sister Catherine Marie Hopkins, who grew up near Syracuse, N.Y., wanted to marry and have a large family. When she taught at a Catholic school in Rochester, she liked to think of the students as her children.

Someone suggested that she might have a vocation. She replied, “I saw God draw my brothers and give them a desire for the religious life, and I do not have one.”

Yet she felt “fear and wonder” at the possibility, then saw the joy in the Dominican Sisters of St. Cecilia of Nashville. God spoke to her, and at age 24, she entered the community. 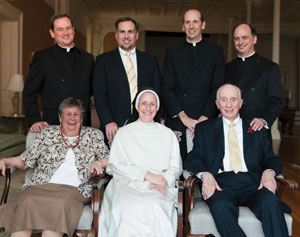 Her brothers were called to be Legionaries of Christ at different stages in their lives, but in such timing that they caught up with each other in formation. On Jan. 3, 1991, they were ordained together by Pope John Paul II in St. Peter’s Basilica.

“Our parents [Peter and Nelly] taught us at a very young age that the only important thing was to do God’s will,” Father John said. “They didn’t talk a lot about vocations, but they did talk about how we had to use our gifts not selfishly, but for others.”

Father Peter recalls the love that his parents openly expressed to each other and to their children.

“I was 6 or 7 and I broke my arm and was in traction in the hospital. My father said, ‘I wish I could trade places with you because I cannot stand to watch you suffer,’” he said. “It is only when I looked back that I understood that really deep love. I think a religious vocation is born if you understand the intensity of God’s love, and you can understand God’s love when you experience it in a human way. To understand that God’s love was even more intense and radical than our parent’s love — that was huge.”

Father Edward was dating a girl when he felt a tug toward priesthood. She was very supportive.

“I had to find out what God wanted,” he said.

He, too, was influenced by his parents’ prayers, their mother’s patience and how their father, who was seriously injured in the Battle of Normandy, struggled to genuflect, but did.

Their brother Stephen, 48, is a psychologist in Nashville.

“His vocation is as needed in the world as ours,” Father Edward said. “A priest can only do so much if something is not a spiritual problem and requires a different healing. Stephen is inspiring and takes his work very seriously. We are proud of him.”

There’s much more. Check it out. It’s an inspiration.

March 22, 2012 Preaching on contraception: "You have to make sure people know you're being compassionate"
Recent Comments
0 | Leave a Comment
"I think I would have been happier had the CDF handled the nuns the way ..."
Theodore Seeber Vatican challenges “interpretation” of cardinal’s remarks ..."
"Blaming "Islamics" for this is like blaming the Pope for the Holocaust Denial of Hutton ..."
Theodore Seeber One killed, 44 injured in Catholic ..."
"It smacks to me of hyper-sensitivity, a veiled spiritual and intellectual pride, with regards to ..."
J D Pope Francis: “A Christian who complains, ..."
"Oh, no, we never change our mind, and we always agree, even on points of ..."
Ron Chandonia Vatican challenges “interpretation” of cardinal’s remarks ..."
Browse Our Archives
Follow Us!

The 4th of July and The End of...
The 4th of July has always been my favorite holiday. (Sorry Christmas...
view all Catholic blogs
What Are Your Thoughts?leave a comment