Fr. Marcel’s statement: “I did the only thing a faithful Catholic priest could do” — UPDATED 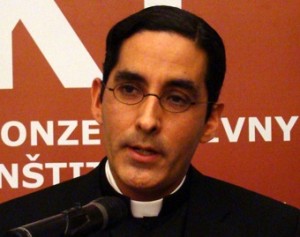 Here are the facts: On Saturday, February 25th I showed up to officiate at a funeral Mass for Mrs. Loetta Johnson. The arrangements for the Mass were also not my own. I wish to clarify that Ms. Barbara Johnson (the woman who has since complained to the press), has never been a parishioner of mine. In fact, I had never met her or her family until that morning.

The funeral celebration was to commence at 10:30a.m.

From 9:30 to 10:20, I was assigned to hear confessions for the parish and anyone in the funeral party who would have chosen to receive the sacrament.

A few minutes before the Mass began, Ms. Johnson came into the sacristy with another woman whom she announced as her “lover.” Her revelation was completely unsolicited. As I attempted to follow Ms. Johnson, her lover stood in our narrow sacristy physically blocking my pathway to the door. I politely asked her to move and she refused.

I understand and agree it is the policy of the archdiocese to assume good faith when a Catholic presents himself for communion; like most priests I am not at all eager to withhold communion. But the ideal cannot always be achieved in life.

In the past ten days, many Catholics have referenced Canon 915 in regard to this specific circumstance. There are other reasons for denying communion which neither meet the threshold of Canon 915 or have any explicit connection to the discipline stated in that canon.

If a Quaker, a Lutheran or a Buddhist, desiring communion had introduced himself as such, before Mass, a priest would be obligated to withhold communion. If someone had shown up in my sacristy drunk, or high on drugs, no communion would have been possible either. If a Catholic, divorced and remarried (without an annulment) would make that known in my sacristy, they too according to Catholic doctrine, would be impeded from receiving communion. This has nothing to do with Canon 915. Ms. Johnson’s circumstances are precisely one of those relations which impede her access to communion according to Catholic teaching. Ms. Johnson was a guest in our parish, not the arbitrer of how sacraments are dispensed in the Catholic Church.

In all of the above circumstances, I would have been placed in a similar uncomfortable position. Under these circumstances, I quietly withheld communion, so quietly that even the Eucharistic Minister standing four feet from me was not aware I had done so.  (In fact Ms. Johnson promptly chose to go to the Eucharistic minister to receive communion and did so.) There was no scandal, no “public reprimand” and no small lecture as some have reported.

Details matter. Ms. Johnson was not kneeling when she approached for communion, she did not receive the cup as the press has reported she has stated. It is the policy of St. John Neumann parish never to distribute under both species during funerals.

During the two eulogies (nearly 25 minutes long), I quietly slipped for some minutes into the sacristy lavatory to recover from the migraine that was coming on. I never walked out on Mrs. Loetta Johnson’s funeral and the liturgy was carried out with the same reverence and care that I celebrate every Mass. I finished the Mass and accompanied the body of the deceased in formal procession to the hearse, which was headed to the cemetery. I am subject to occasional severe migraines, and because the pain at that point was becoming disabling, I communicated to our funeral director that I was incapacitated and he arranged one of my brother priests to be present at the cemetery to preside over the rite of burial.

Furthermore, as the testimony of the priest that was at the cemetery conveys, he was present when the Johnson family arrived, and in fact mentioned that being called to cover the burial rite is quite normal, as many priests for reasons much less significant than mine (rush hour traffic, for example) do not make the voyage to the cemetery. He routinely covers for them. This change in plans, was also invisible to the rest of the entourage. Regrets and information about my incapacitating migraine were duly conveyed to the Johnson family.

I have thanked the funeral director and the priest at the burial site, for their assistance that day. Mrs. Loetta Johnson was properly buried with every witness and ceremony a Catholic funeral can offer. I did not and would not refuse to accompany Barbara Johnson and her mother to the cemetery because she is gay or lives with a woman. I did not in any way seek to dishonor her memory, and my homily at the funeral should have made that quite evident to all in the pews, including the Johnson family.

I would like to extend again to Ms. Johnson and her family, my sincerest condolences on her mother’s death. I would never intentionally want or seek to embarrass anyone publicly or increase anyone’s emotional distress during such a difficult time. I did not seek or contrive these circumstances.

Read more, including his description of what led to his faculties being suspended. He says that, contrary to public statements by the Archdiocese, it is connected to the communion incident.

UPDATE: The Washington Post has more, including reaction to the above statement from Barbara Johnson’s family.

March 14, 2012
Boom: the astonishing growth of the Catholic Church in Texas
Next Post

March 15, 2012 Did you know Rick Santorum is Catholic?
Browse Our Archives
Follow Us!