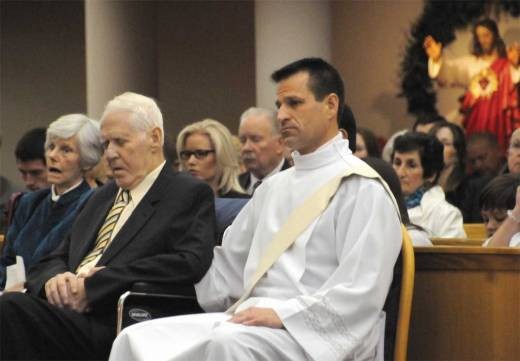 In the past several months, new priest Father Richard Dyer has experienced  deeply the highs and lows of the Christian life.

In late December, he was ordained a priest six months early for the Diocese  of Arlington, Va., by Bishop Paul Loverde to fulfill his dying father’s wish to  be present at his ordination.

After seeing his son become a priest, Father Dyer’s father, Richard Dyer Sr.,  passed away the following day — at almost the same time his son finished  celebrating his first Mass.

“Even amongst the sadness, there’s so much grace being poured out on me, my  dad and my family,” Father Dyer said. “We do have our moments of sadness and  deep sadness, of course, on the natural level, but because of our faith, we turn  to Christ in hope of the Resurrection.”

As Father Dyer and his family continue to grieve, he is back at Mount St.  Mary’s Seminary in Emmitsburg, Md., as both priest and seminarian, finishing his  final coursework this spring semester with his classmates.

His ordination is the latest chapter in a vocation story that has involved  his whole family, especially his dad.

Father Dyer grew up in Germany, Georgia and other locations that Richard Dyer  Sr.’s job as an Air Force colonel took the family. After college, Father Dyer  asked his father to commission him for four years of Air Force service.

He worked at a power plant, where he moved up to vice president. “It really  was a nice career, but, in that process, I was discovering I had this burning  desire for something more — and that emptiness that I felt can only be fulfilled  in Christ,” he said.

Father Dyer started attending St. Andrew the Apostle Church in Clifton, Va.  While participating in the Rite of Christian Initiation of Adults with his  brother-in-law, who was preparing for confirmation, he convinced his mother (a  Catholic) and father (who wasn’t Catholic) to attend, too. “Monday Night  Football was on. I’m sure Dad didn’t want to go. But that Easter [2000], he  entered the Church.”

As his faith grew, Father Dyer wondered if he was called to the priesthood.  After a lot of prayer before the Blessed Sacrament and novenas to St. Thérèse of  Lisieux, he applied to the seminary.

At age 43, he didn’t doubt his call, but his ability to be a priest. “I  thought, I’m going to seminary, but there’s no way I’ll end up being a priest,” he said. “He just wants me to grow in holiness, and, eventually, I’ll come out,  and I’ll get married.”

But he came to see that God truly wanted him to be a priest.

A year before Father Dyer’s scheduled ordination, he learned that his father  had stage-4 kidney cancer. By fall, doctors gave Richard Dyer Sr. a 50% chance  of living until the June 2012 ordination.

“He was doing everything to focus on June,” Father Dyer said. “That was  really a concern to him at the end: just to be able to make it to my  ordination.”

In December, Father Dyer explained the situation to Bishop Loverde in a  letter and asked him to pray to know God’s will about ordaining him early.

The bishop responded by saying he would ordain Father Dyer on Dec. 27.

“When Father Dyer first wrote to me about his father’s failing health, his  humility and servant’s heart were very clear,” said Bishop Loverde. “He  asked me to discern God’s will as to whether he should be ordained now, and I  set to prayer and consultation to decide the correct path. At the end of this  process, I was led to be absolutely convinced that it was right and fitting to  ordain Father Dyer to the priesthood this past December.

“I believe the ultimate unfolding of events reveals this to be a concrete  example of God’s loving care for us and may inspire us all to pray regularly, ‘Give me, O Lord, a discerning heart.’”

The bishop’s decision is extremely unusual for the Arlington Diocese and  reveals the bishop’s love for priests, said Father Brian Bashista, diocesan  vocations director. “It was a beautiful accommodation, and many graces have  flown from it,” he said. “It’s very rare, and, as the circumstances unfolded, it  was just a beautiful way the bishop gave him consideration.”

March 22, 2012
This is why researchers spent years perfecting the portable camcorder
Next Post