A couple people dropped me an e-mail or left a comment in the combox about this.  Fr. Marcel Guarnizo can no longer function as a priest in the Archdiocese of Washington. Details below, courtesy Abbey Roads: 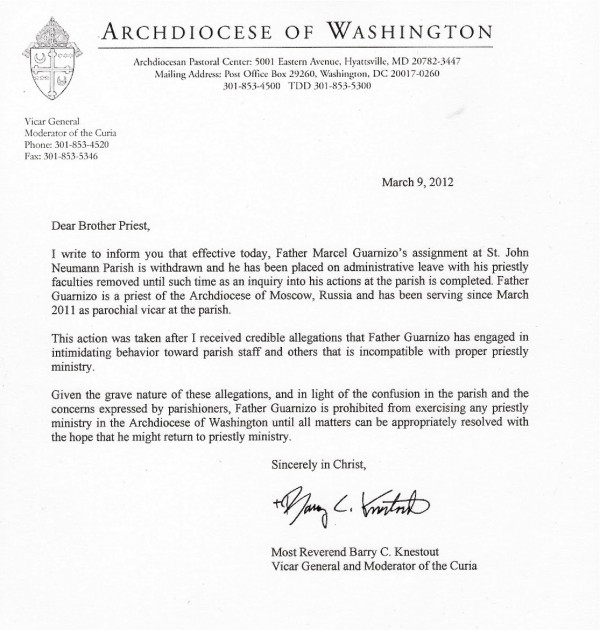 A reader told me that Fr. Marcel’s pastor read the above letter at all the Masses this weekend, and took pains to point out that it was unrelated to the communion controversy.

Stay tuned. And keep all concerned in your prayers.

A statement Sunday from the family of Barbara Johnson, the woman who was denied communion, implied that the investigation and punishment were not related to the Feb. 25 funeral Mass at St. John Neumann parish. As Johnson, 51, a D.C. artist, approached Guarnizo in the Communion line that day, he covered the bread and told her that he could not give her the sacrament “because you live with a woman, and in the eyes of the church, that is a sin,” Johnson recalled of the interaction.

Guarnizo as well as staff at the archdiocese and the parish have refused to comment on what happened at the Mass.

“The Johnson family continues to pray for the Archdiocese of Washington, Father Guarnizo, and all Catholics during this time of upheaval. While we understand this letter does not pertain to the events that occurred at our mother’s funeral, we are hopeful that Bishop Knestout’s decision will ensure that no others will have to undergo the traumatic experiences brought upon our family. We urge all Catholics to put aside political points of view, and pray that our Church will remain in Christ’s love.”

The interaction between Johnson and Guarnizo, who grew up in Northern Virginia and has spent much of his ministry in Russia and Eastern Europe, triggered intense debate and feelings among Catholics on the Web. Some said being in a same-sex relationship makes someone automatically ineligible for Communion, a moment that Catholicism teaches creates the actual presence of Jesus Christ and is not for people outside of a “state of grace.” Others said the process of determining a person’s “state of grace” is a far more complex and personal, something between a Catholic and God.

1. Fr. Guarnizo has not been suspended (suspension is a canonical penalty levied only upon guilt for crimes, per c. 1333), but he has been placed on “administrative leave”, a term not found in the Code, but nevertheless serving as a practical description of a situation in which, usually, one is not permitted to function as a cleric for so long as a wider situation requires resolution. A priest’s faculties for confession, preaching (homilies), witnessing weddings, etc. can be restricted a couple of different ways, and there is no reason to think that those ways were not satisfied in this action (although direct discussion of them is lacking).

From the text of the letter, I cannot tell whether Guarnizo is prohibited from celebrating Mass even in private (he is certainly prohibited from public celebration), although the trend in such cases is to allow for private celebration. This question could easily be addressed between Knestout and Guarnizo, and probably has already been answered.

2. A vicar general almost certainly has sufficient authority to issue such a letter (c. 479 § 1); one may expect the Cardinal to be informed of this action in a timely manner (c. 480).

3. As a parochial vicar, Guarnizo has considerably fewer procedural rights to office than would a pastor. Compare a pastor’s rights under c. 522, etc., and c. 1740 etc., with those of a parochial vicar, per c. 552. All associate pastors know this.

4. Guarnizo is not “incardinated” in the Archdiocese of Washington (c. 265 etc.); the situation of an “extern” priest is inherently more tenuous than is the situation of locally incardinated clergy, it being a function more of contract (express or implied) than of law. All extern priests know this.

5. Little in Knestout’s letter suggests that this action is being taken in response to the lesbian/Communion controversy (though one may be sure that the pro-lesbian camp will claim victory, and the pro-Guarnizo camp will decry the ‘mistreatment’ of the priest).

The allegations of “intimidating behavior” by Guarnizo are not recited in Knestout’s letter, but three questions would occur to me: (a) is this just a pile-on by people looking to kick Guarnizo while he is down?, or (b) are there long-standing legitimate complaints against Guarnizo that the recent controversy made more likely to surface? , or (c) did Guarnizo’s post-controversy conduct in the parish render him intemperate with others, provoking what are really recent complaints? Such are the things that an investigation is designed to, well, investigate.

March 11, 2012
"To be cool with God": a young Catholic's thoughts on confession
Next Post

March 12, 2012 Study: Catholics a minority at America's largest Catholic university
Recent Comments
0 | Leave a Comment
Browse Our Archives
get the latest from
Catholic
Sign up for our newsletter
POPULAR AT PATHEOS Catholic
1