“A kneeling racist and an upright archbishop” 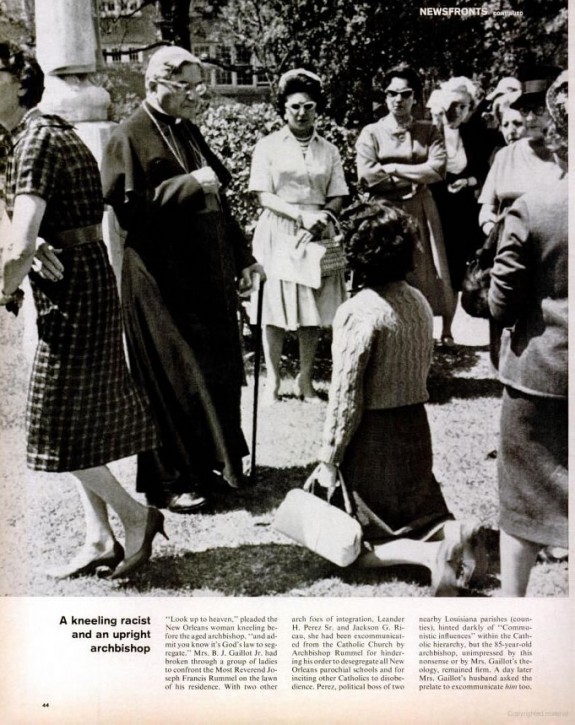 That was the headline for the picture above, which was reposted the other day in the excellent website run by Deacon Eric Stoltz, Conciliaria, which commemorates the 50th anniversary of the Second Vatican Council.

On April 16, after a long period of negotiations with leading conservative segregationists of the Archdiocese of New Orleans, several of whom backed down from their opposition to his plans to integrate the parochial schools, Archbishop Joseph Francis Rummel excommunicated three defiant racists. These three insisted the archbishop was a heretic and Communist seeking to undermine God’s wish that the races be separate and black people be subject to the oppression of the white majority.

The photograph and caption from Time Magazine show one of the excommunicated conservatives engaging in a dramatic gesture, calling on the archbishop to repent of his heresy.

“Look up to heaven,” pleaded the New Orleans woman kneeling before the aged archbishop, “and admit you know it’s God’s law to segregate.” Mrs. B. J. Gaillot Jr. had broken through a group of ladies to confront the Most Reverend Joseph Francis Rummel on the lawn of his residence. With two other arch foes of integration, Leander H. Perez Sr. and Jackson G. Ricau, she had been excommunicated from the Catholic Church by Archbishop Rummel for hindering his order to desegregate all New Oreleans parochial schools and for inciting other Catholics to disobedience. Perez, political boss of two nearby Louisiana parishes (counties), hinted darkly of “Communistic influences” within the Catholic hierarchy, but the 85-year-old archbishop, unimpressed by this nonsense or by Mrs. Gaillot’s theology, remained firm. A day later Mrs. Gaillot’s husband asked the archibishop to excommunicate him too.

It’s a fascinating, and sad, piece of our history.  Read the rest.

April 19, 2012 "Stunned": LCWR responds to Vatican
Recent Comments
0 | Leave a Comment
"I think I would have been happier had the CDF handled the nuns the way ..."
Theodore Seeber Vatican challenges “interpretation” of cardinal’s remarks ..."
"Blaming "Islamics" for this is like blaming the Pope for the Holocaust Denial of Hutton ..."
Theodore Seeber One killed, 44 injured in Catholic ..."
"It smacks to me of hyper-sensitivity, a veiled spiritual and intellectual pride, with regards to ..."
J D Pope Francis: “A Christian who complains, ..."
"Oh, no, we never change our mind, and we always agree, even on points of ..."
Ron Chandonia Vatican challenges “interpretation” of cardinal’s remarks ..."
Browse Our Archives
get the latest from
Catholic
Sign up for our newsletter
POPULAR AT PATHEOS Catholic
1

Saints Remind Us To Be Thankful
Today is Thanksgiving and it has been quite the year.  Over the...
view all Catholic blogs
What Are Your Thoughts?leave a comment