A priest writes: “Why I refuse to bless children at communion” — UPDATED

This doesn’t happen a lot at my parish, but it’s prompted a couple of priests (including Fr. Z) to weigh in against the practice. 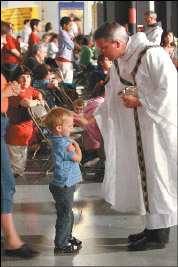 I’ve been thinking more and more about my concerns around giving special blessings to children at Mass. There are a number of people here who are continuing to express concern because of my stance on not blessing children in the communion line. To be clear, this is a position taken not out of spite, but out of a respect for the liturgy and for the documents of the Second Vatican Council. In paragraph 22, Sacrosanctum Concilium states, “Therefore no other person, even if he be a priest, may add, remove, or change anything in the liturgy on his own authority.” A priest does not have the authority to add a blessing to the liturgy for anyone, because a priest does not have the authority to add anything to the liturgy. It doesn’t matter if other priests go beyond their authority and do it in disobedience. In my mind, it is inappropriate, and I will not. Period.

Of course, people don’t like to hear that. They think it makes the kids feel “special” that they receive this blessing. (As an aside, I think the parents and grandparents get the warm-fuzzies more than the kids do.) Of course, they can’t be blamed. For 30+ years, they’ve been fed a mindset that the liturgy is malleable to whatever we want to do with it. Blessing for kids? Sure, we can add that right during Communion. Having kids come up for the homily and sit with the priest on the sanctuary steps? Sure, we can do that. Holding hands during the Our Father and running around the nave greeting people during the Sign of Peace? Absolutely! Whatever makes you feel good!

As I’ve studied more about the theology of the liturgy, I’ve come to the realization that this “feel good” approach is sending the wrong message about the liturgy. I’ve also become concerned that this has dangerously damaged their relationship with God, and they are blissfully unaware that any damage has been done. Instead of liturgy being the community focusing their minds and hearts on worship of God, it has become a social activity, focusing on ourselves. Now, we don’t come to liturgy to turn to God, but to ourselves. For this reason alone, I despise blessing children (and yes, I chose that strong language very carefully), and encourage other priests to stop immediately.

There’s another reason, more cultural, that should be of concern to these same parents and grandparents: the culture of entitlement. One of the arguments frequently given in defense of blessing children is, “They feel like they get something.” Yes, because we wouldn’t want our children to learn how to do something without getting something in return.

We live in a culture of entitlement, where a large percentage of the population expects to get something for nothing. There is a large population in the United States and other countries who believe that they are entitled to anything and everything their hearts desire without any commitment or work on their part. They should “get something” for just being there. Is that the message we want to give our children in the Church? I don’t, and firmly hope that parents and grandparents don’t want to send that message either. Unfortunately, this mindset that children need to “get something” at Communion time only enforces this idea.

In my experience, I encounter maybe one or two people on a Sunday who present their kids for a blessing.  Another blogger — I think it was Msgr. Pope — suggested this simple formula, which is not a blessing but simply an admonition: “Receive Jesus in your heart.” I’ve adapted that and I think it’s a suitable solution.

Personally, I’m not a fan of the blessing-during-communion trend — among other things, it’s not the place for it, and everyone gets a blessing at the end of Mass anyway — but I don’t think it’s helpful to refuse a blessing to a child, either.

This — and other issues involving the reception of communion — might be a good topic to address from the pulpit on Corpus Christi.

UPDATE: I got an interesting e-mail from a priest friend, who noted:

The conversation has puzzled me since I first ran across it (in Homiletic and Pastoral Review a few years ago). It seems to be presented as a postconciliar aberration. Yet I remember growing up in Queens as a young boy, kneeling at the altar rail and unfailingly receiving a blessing. It’s definitely not a new thing, and it has always seemed to me that Eastern European immigrants expected it (which suggests that it is rooted in those cultures).   It seems to me a natural thing to do.

Meantime, there’s a good overview of relatively recent teaching on this matter here:

A document has appeared in several Internet sources which indicate that the Holy See is tending toward a negative view of the practice. The document is a letter (Protocol No. 930/08/L) dated Nov. 22, 2008, sent in response to a private query and signed by Father Anthony Ward, SM, undersecretary of the Congregation for Divine Worship.

As a private reply the letter is not yet a norm with legal force and, as it makes clear, is not a definitive reply. However, it provides some valuable pointers on the legitimacy of this practice and the mind of the Holy See regarding it.

The letter said that “this matter is presently under the attentive study of the Congregation,” so “for the present, this dicastery wishes to limit itself to the following observations”:

“1. The liturgical blessing of the Holy Mass is properly given to each and to all at the conclusion of the Mass, just a few moments subsequent to the distribution of Holy Communion.

“3. Furthermore, the laying on of a hand or hands — which has its own sacramental significance, inappropriate here — by those distributing Holy Communion, in substitution for its reception, is to be explicitly discouraged.

“4. The Apostolic Exhortation Familiaris Consortio n. 84, ‘forbids any pastor, for whatever reason or pretext even of a pastoral nature, to perform ceremonies of any kind for divorced people who remarry’. To be feared is that any form of blessing in substitution for communion would give the impression that the divorced and remarried have been returned, in some sense, to the status of Catholics in good standing.

“5. In a similar way, for others who are not to be admitted to Holy Communion in accord with the norm of law, the Church’s discipline has already made clear that they should not approach Holy Communion nor receive a blessing. This would include non-Catholics and those envisaged in can. 915 (i.e., those under the penalty of excommunication or interdict, and others who obstinately persist in manifest grave sin).”

Although the letter as such is not legally binding, some of its points, such as No. 2 on the prohibition of lay ministers giving liturgical blessings, are merely restatements of existing law and as such are already obligatory.

Nor did the letter deal with all possible circumstances, such as the case of small children mentioned by our reader. Because of this, some dioceses have taken a prudent wait-and-see attitude regarding these blessings. For example, the liturgy office of the Archdiocese of Atlanta, while reiterating that “the Archdiocese has no policy prohibiting the use of blessings at the time of Holy Communion,” prudently suggested to pastors that it “may be appropriate to avoid promoting the practice until a more definitive judgment regarding its value in the liturgical celebration can be obtained.”

There’s much more beyond that.  Read it all.
Comments closed.
Previous Post

April 9, 2012 True, so true
Browse Our Archives
Related posts from The Deacon's Bench