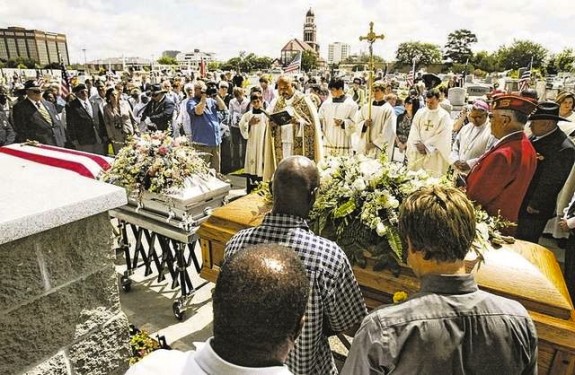 You may remember this item I posted last month, about a Catholic diocese in Louisiana planning a funeral for dozens of people whose bodies were never claimed at the local coroner’s office.

Saturday, that service took place, and the local paper was there:

A few hundred people gathered at the Cathedral of St. John the Evangelist on Saturday morning to celebrate the lives of those forgotten with a rosary, wake, Mass and graveside military service. Some of the human remains had gone unclaimed for up to 20 years at the Lafayette Parish Coroner’s Office.

“We’re lying 118 brothers and sisters to rest after some have passed for many years,” said Kimberly Boudreaux, executive director of Lafayette Catholic Centers.

The unclaimed ranged from fetal miscarriages to a 95-year-old woman named Adela Salezar. Some names were without ages, others without surnames. Three of the unclaimed were listed as John Doe.

“From the earliest time of Christianity, this is what we have done as a way to recognize the dignity of every human life,” said Brady LeBlanc, the cathedral’s cemetery director.

During the wake, each of the 118 names of the unclaimed was read aloud — including the given Christian names of many unknown infants — and each name echoed somberly through the cathedral center.

A smile broke on Boudreaux’s face as she spoke about the man who inspired the entire funeral — Brian Walker, who lived in the St. Joseph Shelter for Men for five years. Boudreaux had grown close to Walker through her work at the shelter.

Six months after Walker’s death, Boudreaux found out that no friends or family had claimed his body and that his remains were still housed at the Lafayette Parish Coroner’s Office. Heartbroken, Boudreaux asked if she could claim his remains and bury them. Subsequent questions flooded her mind: How many other people had gone unclaimed? Could she claim every person whose remains were housed at the coroner’s office?

“(Walker) was always saying, ‘This isn’t right and that isn’t right’ in a quest for justice in the community,” Boudreaux said. “This service has become a way of finding justice for those who were treated without justice.”

Eternal rest grant unto them, O Lord, and let perpetual light shine upon them…

The Conversion of Zacchaeus
On five Sundays preceding the Great Fast, the Byzantine tradition prepares its...
view all Catholic blogs
What Are Your Thoughts?leave a comment