New York ordains just one priest — and his first Mass is in Latin May 24, 2012 Deacon Greg Kandra 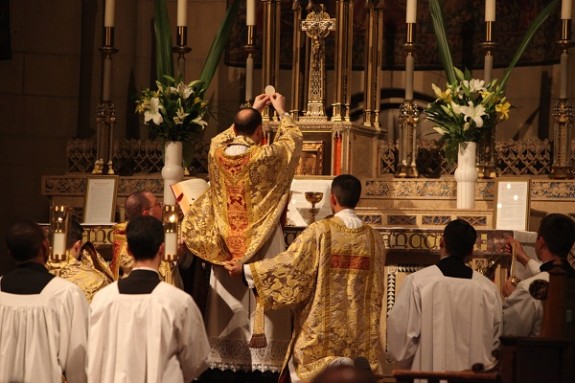 Today Fr. Patric D’Arcy, newly ordained priest of the Archdiocese of New York, celebrated his first Mass – a Solemn High Mass in the Extraordinary Form – amid the Gothic splendor of Blessed Sacrament Church. Many clergy and seminarians were in attendance. A schola performed both chant and polyphony, including Allegri’s Miserere.

The website for the Archdiocese of New York has biographical details about Fr. D’Arcy:

As a child, Father Patric D’Arcy looked up to his father as a role model. So when he saw that his father viewed priests as “honorable, noble and good,” he realized the priesthood was “something special.”

“My parents, especially my dad, always showed great respect for the Church and for priests,” Father D’Arcy said. His father, Frank, and his mother, Maureen, attended Sunday Mass faithfully with their four children. He credits the faith of his parents, and their support, as the greatest influences early in his vocation.

“Both of my parents spent their energy building their family and their children,” he said of his home life in Galt, Ontario, Canada.

Father D’Arcy credits his grandparents, notably his grandmothers as another early influence on his faith life. They shared with him their love of the Holy Father, the Church, Our Lady, the Blessed Sacrament and the Mass.

His grandmothers also taught him an important lesson he has carried with him throughout his life. “When faced with confusion, the pope is always someone to look to,” he said.

In recalling his childhood, Father D’Arcy told how serving as an altar boy affected his vocation journey. His father was an altar server as a boy, and when Father D’Arcy learned that, he likewise wanted to serve. The experience made an impact right away.

“When I started to serve Mass during the week, that’s when I started praying and fell in love with the Mass,” he said. 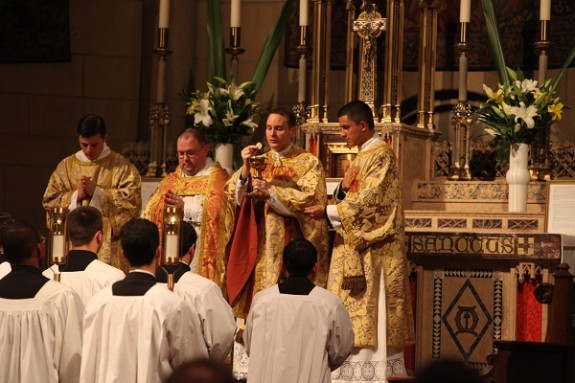 May 24, 2012
Vatican publishes rules on Virgin Mary sightings
Next Post

May 24, 2012 Another giant falls: New Orleans paper may cease daily publication
Recent Comments
0 | Leave a Comment
"I think I would have been happier had the CDF handled the nuns the way ..."
Theodore Seeber Vatican challenges “interpretation” of cardinal’s remarks ..."
"Blaming "Islamics" for this is like blaming the Pope for the Holocaust Denial of Hutton ..."
Theodore Seeber One killed, 44 injured in Catholic ..."
"It smacks to me of hyper-sensitivity, a veiled spiritual and intellectual pride, with regards to ..."
J D Pope Francis: “A Christian who complains, ..."
"Oh, no, we never change our mind, and we always agree, even on points of ..."
Ron Chandonia Vatican challenges “interpretation” of cardinal’s remarks ..."
Browse Our Archives
get the latest from
Catholic
Sign up for our newsletter
POPULAR AT PATHEOS Catholic
1

Was Sodom Destroyed by a Meteor in Abraham's...
Genesis 14:1-3 (RSV) In the days of Am'raphel king of Shinar, Ar'ioch king...
view all Catholic blogs
What Are Your Thoughts?leave a comment