Snapshot of the Class of 2012: America’s new priests 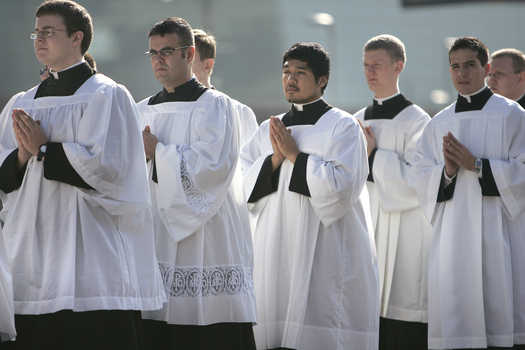 As has become its custom, the USCCB has posted a survey with some interesting facts about the men who are being ordained this spring:

The average age of men ordained to the priesthood in 2012 is trending younger with the median age for the 2012 class at 31. Two-thirds of the class are between the ages of 25 and 34. This is slightly younger than last year and follows the trend over the past six years.

These figures stand out in The Class of 2012: Survey of Ordinands to the Priesthood, an annual national survey of men being ordained priests for U.S. dioceses and religious communities. The study was conducted by the Center for Applied Research in the Apostolate (CARA), a Georgetown University-based research center. The entire report can be found at www.usccb.org/beliefs-and-teachings/vocations/ordination-class/.

The report is the 16th annual survey of ordinands commissioned by the Secretariat for Clergy, Consecrated Life and Vocations of the U.S. Conference of Catholic Bishops (USCCB). About 63 percent of an estimated 487 potential ordinands in the United States responded to the survey.

Data show that on average, most of the ordination class have been Catholic from birth, but six percent became Catholic later in life. More than four in five report that both parents are Catholic, and more than a third have a relative who is a priest or religious.

The survey also found that new priests in dioceses and religious orders have educational debt. The debt is higher on average among men being ordained for the diocesan priesthood.Diocesan ordinands averaged $19,614 in educational debt when they entered the seminary.Several reported that their educational debt is now paid, but those still with educational debt average $20,966 at the time of ordination.

• Seven in ten responding ordinands (71 percent) report their primary race or ethnicity as Caucasian/European American/white. Compared to the U.S. adult Catholic population, ordinands are more likely to be of Asian or Pacific Islander background (nine percent), but less likely to be Hispanic/Latino (15 percent). Compared to diocesan ordinands, religious ordinands are less likely to report race or ethnicity as Caucasian/European American/white.

May 21, 2012
“The worst thing you can do is send your kids to a Catholic school if you want them to retain their faith.”
Next Post

May 21, 2012 Quote of the day
Recent Comments
0 | Leave a Comment
"I think I would have been happier had the CDF handled the nuns the way ..."
Theodore Seeber Vatican challenges “interpretation” of cardinal’s remarks ..."
"Blaming "Islamics" for this is like blaming the Pope for the Holocaust Denial of Hutton ..."
Theodore Seeber One killed, 44 injured in Catholic ..."
"It smacks to me of hyper-sensitivity, a veiled spiritual and intellectual pride, with regards to ..."
J D Pope Francis: “A Christian who complains, ..."
"Oh, no, we never change our mind, and we always agree, even on points of ..."
Ron Chandonia Vatican challenges “interpretation” of cardinal’s remarks ..."
Browse Our Archives
Follow Us!

"Don't Hide from the Sins of Saint Louis"
I'm in America: I will pour forth tears until like a river...
view all Catholic blogs
What Are Your Thoughts?leave a comment