Mercy Sr. Margaret Farley addressed for the first time publicly Friday evening the Vatican’s harsh criticism of one of her books, saying it points to “profoundly important” questions facing the Catholic community regarding the roles of truth and power. 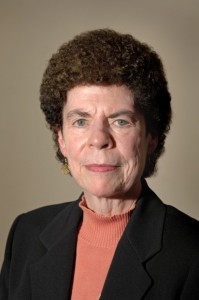 Speaking slowly, and at times faltering for words, Farley, a prominent moral theologian, addressed the issue during a session at the 67th annual meeting of the Catholic Theological Society of America (CTSA) that saw some 300 colleagues gather to ask what the Vatican’s critique might mean for the future of their discipline.

Ultimately, said Farley on Friday, the critique of the Vatican’s Congregation for the Doctrine of the Faith of her book Just Love, indicates different understandings of the role of theologians in the church and how our tradition changes and grows over time.

“We clearly have grown in many spheres of knowledge — about humans, about the way the universe runs,” said Farley. “It seems reasonable … that if we come to know even a little bit more than we knew before, it might be that the conclusions that we had previously drawn need to be developed. Or maybe even let go of.

“Because it would be a contradiction to Roman Catholic frameworks for doing moral theology to say that we can’t. That would be to imply that we know everything we can know and there’s nothing more to be done.”

In her talk Friday, which came during an hour-long session set aside by the CTSA specifically to address the Vatican’s critique, Farley also spoke of her reason for writing her book, which explores how theories of justice might be applied to help create “norms” to guide our sexual actions.

The Vatican’s critique, released in a formal “notification” June 4, did not mention that aspect of the book, only citing Farley’s positions on a number of specific issues, which are only briefly discussed in the work.

“The issue is, finally, in our tradition, is it a contradiction to have power settle questions of truth? Or to say we all have a capacity to know what we ought to do?” asked Farley.

“We can make mistakes, we can disagree — but is it the case that natural law is let go when we really only know the answers because of grace of office? This is a profoundly important question in our tradition today.”

Following Farley’s ten-minute address, which was greeted by a standing ovation, a number of the theologians present asked questions of their colleague, both expressing concern for her well-being and probing what broader significance the move against her might have for their future.

June 10, 2012 Congratulations, Fr. Duffy
Browse Our Archives
get the latest from
Catholic
Sign up for our newsletter
POPULAR AT PATHEOS Catholic
1