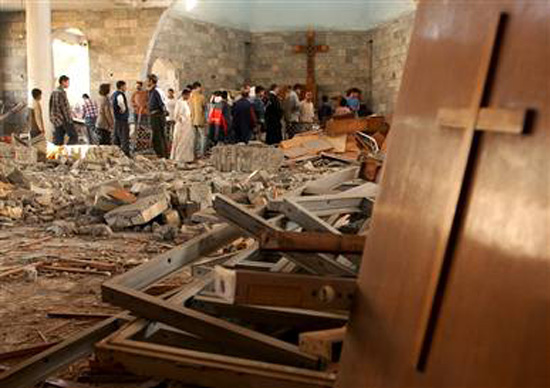 That’s from Archbishop Bashar Matti Warda, who serves the Chaldean Catholic Archdiocese of Erbil in northern Iraq.  He spoke with Tim Drake of the National Catholic Register:

What are three things you would like American Catholics to know about Catholics in Iraq?

First, that Christianity has had a presence in Iraq for 2,000 years. It’s a very old community. It has not been converted from Islam. We were there before Islam. Our schools were always the best, even from the sixth and seventh centuries. Second, we’ve been through a very difficult time. We are grateful to the many people who have held out a hand of charity and solidarity with us, the various Catholic charities. However, we would like to leave this path of charity for the path of opportunity. Yes, we are a minority, but we have the capability to stay and build a good future for Iraq. Third, I would like to see more of a commitment by the media to raise the awareness of the issues in Iraq to build schools and hospitals. We are not benefitting from the wealth that Iraq has. We need to find ways to stay and build the community. When we leave Iraq, it’s a big loss. When I visited our communities in Detroit, the second and third generations are no longer speaking the language. Our whole culture is gone.

Do you see a peaceful generation coming?

Yes, that’s what we have to work for. The next generation is not following in the footsteps of their parents because they are tired of the mess. So many voices are asking when, for what and why? These courageous questions are helpful.

What do we miss when we lump the Middle East together as a region?

There are areas of the Middle East that people can safely visit and benefit from. The roots of Christianity are there. We managed to open an international school in Erbil. We had five Americans from Washington and Dallas who are committed to helping us. I depend on them to come back to tell their story, not from a political point of view, but what it’s like to live among the community and in the heart of the community. The more you visit, the more you realize the richness and diversity of what’s there. You also learn about the dialogue between the communities and the lines that you have to respect. More positive articles and reports could help Americans and Europeans know more about the Middle East. We do not want to be on the news only because of violence and killings.

For me and my community and the coming Year of Faith, we have prayed for that a lot and have had retreats and workshops to prepare and celebrate with the young people in our parishes. We see it as strengthening our relationship with Jesus who suffered and was crucified. This means reflecting on our wounds and not just bearing them, but taking these wounds with joy that we have participated in the suffering of Our Lord. We believe that true Christianity is a persecuted Christianity. That’s true all over the world. We can reflect on the past 10 years and say that the Lord is telling us something here. We have to deepen our relationship with him and announce the Catholic faith in a new vision which would welcome all those who are at the margins.

One of the bad effects of 2003 is that it’s opened the country for new evangelical groups who have come to steal from our community and churches. They come in ignorance telling us, “We are going to tell you about Jesus Christ.” I respond by saying, “Yes, I know him.” These groups succeed because they have financial ability. I told a group from Dallas, “You are weakening Christianity here. We are weak enough here in number, and you are dividing us. If you want to help Christians, first come to my place, not to places outside my diocese to try to attract others.”

June 13, 2012 Welcome to another boy from Queens!
Browse Our Archives
Related posts from The Deacon's Bench