My blogging diaconal brother Scott Dodge from Utah posted this item, which indicates the Church could one day have a Saint Cora: 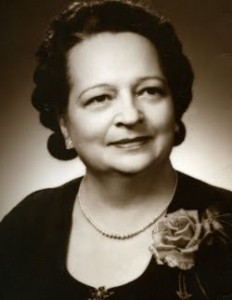 A Catholic News Agency report filed on Friday afternoon by Valerie Schmalz from San Francisco announced that the Holy See has paved the way for a complete investigation into the cause for Cora’s canonization. In a letter dater 29 March 2012, the Prefect of the Congregation for Causes of Saints, Angelo Cardinal Amato, granted the necessary nihil obstat for “the Cause for Beatification and Canonization of the Servant of God, Cora Louise Evans.” Lest we get too carried away, there is no certainly she will ultimately be raised to the altar, but the way has been opened for her cause to proceed. In Schmalz’s words, “The Vatican has approved a complete investigation into the cause of sainthood of a former Mormon wife and mother who reported visions of Jesus and a mission to promote “The Mystical Humanity of Christ.”

Cardinal Amato’s letter was written to Bishop Richard Garcia of Diocese of Monterey in California, who is the ordinary of the place where Cora ended her mortal life and so the one who permitted and promoted her cause going forward up to this point.

Evans, who was baptized in 1935 in Utah after becoming disillusioned by the Mormon faith, died March 30, 1957, near Monterey. She reported visions of Jesus and the saints and a mission from Jesus to promote the “Mystical Humanity of Christ,” the idea that Christ is always within us and we should behave always as Christ would, said Mike McDevitt, a parishioner at Our Lady of the Pillar in Half Moon Bay, who is the promoter of Evans’ cause of sainthood. The spirituality is also focused on praying the Mass.

Evans’ two children, husband Mack, and many family and friends followed her from The Church of Jesus Christ of Latter-day Saints into the Catholic faith.

July 16, 2012 Wipeout: stunning video of a mudslide in action
Browse Our Archives
get the latest from
Catholic
Sign up for our newsletter
POPULAR AT PATHEOS Catholic
1