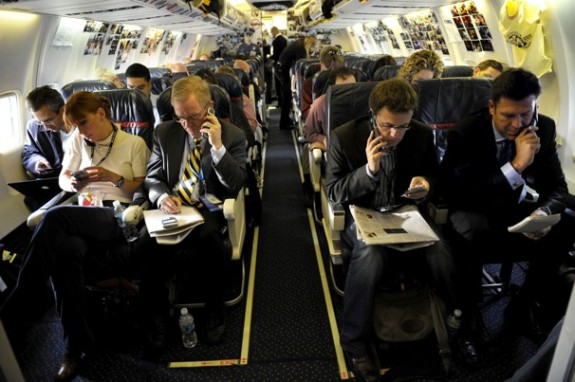 This is just…unreal.  It is many things, but it ain’t journalism.

The quotations come back redacted, stripped of colorful metaphors, colloquial language and anything even mildly provocative.

They are sent by e-mail from the Obama headquarters in Chicago to reporters who have interviewed campaign officials under one major condition: the press office has veto power over what statements can be quoted and attributed by name.

Most reporters, desperate to pick the brains of the president’s top strategists, grudgingly agree. After the interviews, they review their notes, check their tape recorders and send in the juiciest sound bites for review.

The verdict from the campaign — an operation that prides itself on staying consistently on script — is often no, Barack Obama does not approve this message.

The push and pull over what is on the record is one of journalism’s perennial battles. But those negotiations typically took place case by case, free from the red pens of press minders. Now, with a millisecond Twitter news cycle and an unforgiving, gaffe-obsessed media culture, politicians and their advisers are routinely demanding that reporters allow them final editing power over any published quotations.

Quote approval is standard practice for the Obama campaign, used by many top strategists and almost all midlevel aides in Chicago and at the White House — almost anyone other than spokesmen who are paid to be quoted. (And sometimes it applies even to them.) It is also commonplace throughout Washington and on the campaign trail.

The Romney campaign insists that journalists interviewing any of Mitt Romney’s five sons agree to use only quotations that are approved by the press office. And Romney advisers almost always require that reporters ask them for the green light on anything from a conversation that they would like to include in an article.

From Capitol Hill to the Treasury Department, interviews granted only with quote approval have become the default position. Those officials who dare to speak out of school, but fearful of making the slightest off-message remark, shroud even the most innocuous and anodyne quotations in anonymity by insisting they be referred to as a “top Democrat” or a “Republican strategist.”

It is a double-edged sword for journalists, who are getting the on-the-record quotes they have long asked for, but losing much of the spontaneity and authenticity in their interviews.

Jim Messina, the Obama campaign manager, can be foul-mouthed. But readers would not know it because he deletes the curse words before approving his quotes. Brevity is not a strong suit of David Plouffe, a senior White House adviser. So he tightens up his sentences before giving them the O.K.

Stuart Stevens, the senior Romney strategist, is fond of disparaging political opponents by quoting authors like Walt Whitman and referring to historical figures like H. R. Haldeman, Richard Nixon’s chief of staff. But such clever lines later rarely make it past Mr. Stevens.

Many journalists spoke about the editing only if granted anonymity, an irony that did not escape them. No one said the editing altered the meaning of a quote. The changes were almost always small and seemingly unnecessary, they said.

Those who did speak on the record said the restrictions seem only to be growing. “It’s not something I’m particularly proud of because there’s a part of me that says, ‘Don’t do it, don’t agree to their terms,’ ” said Major Garrett, a correspondent for The National Journal. “There are times when this feels like I’m dealing with some of my editors. It’s like, ‘You just changed this because you could!’ ”

It was difficult to find a news outlet that had not agreed to quote approval, albeit reluctantly. Organizations like Bloomberg, The Washington Post, Vanity Fair, Reuters and The New York Times have all consented to interviews under such terms.

July 16, 2012
"We believe he died with forgiveness in his heart"
Next Post

July 16, 2012 A former Mormon moves closer to sainthood
Browse Our Archives
get the latest from
Catholic
Sign up for our newsletter
POPULAR AT PATHEOS Catholic
1