Lift high the cross—and the pelican, too

My blogging colleague Joanne McPortland has this story up over at her place, and my palm instantly went to my forehead:

“We will be approaching Mark Nelson of Nelson Fine Art and Gifts and asking him to redesign the city logo to remove the cross and silhouette of the Christ the King Chapel on the Franciscan University of Steubenville campus.,” said Repella.

“We were contacted in May by the Freedom from Religion Foundation Inc. in Madison, Wis., who said one of our citizens had complained about the city logo. During the past several months the foundation sent me their research and past case law regarding religious symbols. I researched current case law and found a lot of case laws that do not allow religious symbols in government symbols,” continued Repella.

We have discussed the issue with City Council and we will ask Mark Nelson to design a silhouette of another building such as the library or a dormitory for the city logo. The council realizes the potential cost to our city taxpayers may be very expensive to try to win the case,” added Repella.

You can see the offending logo for yourself over at Egregious Twaddle, if your delicate sensibilities can bear it.  But after posting that eye-rolling news item, Joanne then decides to just let ‘er rip:

Forget that the silhouette of the Franciscan University chapel with its hideously offensive cross, one of the city’s most recognizable landmarks, makes up only about a quarter of the city’s logo, or that the University is one of the city’s biggest employers and contributors to the local economy. Budgets are tight, and it’s cheaper, they think, to knuckle under to bullies than to defend the lawsuits the bullies are using instead of brass knuckles these days.

I’m a lot less polite than my friend, and my dudgeon is considerably higher. I think the Steubenville City Council didn’t take time to do their due diligence. If they had done the five minutes of Googling I did, they might have found that cities like Salt Lake City, Utah have no problem at all incorporating recognizably religious architecture into their official seals: Salt Lake City’s seal is entirely taken up by a representation of the Mormon Tabernacle. The seal of the city of San Antonio, TX is crowned by a representation of the Alamo—or Mission San Antonio de Valero, to give it its baptismal name.

All of which reminded me of an image that must surely appall atheists and non-believers of any stripe: a pious bit of iconography that inflicts itself on innocent people every day around the great state of Louisiana.

That would be the state flag, below: 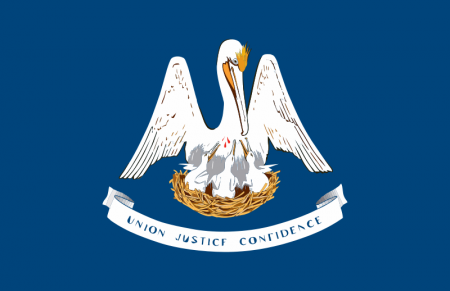 According to legend, in a time of famine a mother pelican would draw blood from her own chest and give the blood to her chicks.

Thus the pelican symbol in Christianity, also called pelican-in-her-piety, symbolizes the sacrifice of Christ on the cross (because he gave his blood for others) as well as the Eucharist (because it represents Christ’s blood and provides spiritual nourishment).

The flag of Louisiana consists of a heraldic charge called a “pelican in her piety,” representing a mother pelican wounding her breast to feed her young from the blood. This symbol, emblematic of Christian charity, is also found on the state seal. On the flag it is depicted above a ribbon with the state motto: “Union, Justice, and Confidence”. The current flag was adopted in 2006, revising the original pelican design of 1912.

During the 19th century it was traditional in Louisiana flags and the state seal for the “pelican in her piety” to have three drops of blood on her chest.[1] However, in later years the tradition (on both the state flag and seal) had been haphazardly followed, which was noticed by an eighth-grader at Vandebilt Catholic High School in Houma who brought this to the attention of his state legislator.[1] The issue was resolved in April 2006, when the Louisiana State Legislature passed a bill (House Bill 833/Act 92[2]) which requires three drops of blood to be depicted on the pelican used in both the state’s flag and seal. The new state flag, featuring a new design, was recently unveiled during swearing-in ceremonies of new state officials.

Not only does the Louisiana state flag depict a symbol with deep Christian roots; it is also (shockingly!) Catholic.  It shows both the Passion of the Christ and the Most Precious Blood.

And PEOPLE LET THIS SORT OF THING FLY OVER  PUBLIC BUILDINGS EVERY DAY!!??

Somebody get me my smelling salts.  I think I’m having an attack of the vapors.

Meantime, when all is said and done, the nation seems to be surviving Louisiana’s blatant display of religious piety just fine.

As for the hand-wringers in Ohio: grow up.  This sort of foolishness only goes to show that politically correct yahoos on the left have at last become what they most despised among people on the right: intolerant, judgmental, petty and — to use a term every Louisianan will know — picayune.

For a big country, we have a disturbing propensity at times to behave very small.

July 25, 2012
From Magnificat: a beautiful meditation by Jean Vanier on service
Next Post