Thousands turn out for religious freedom walk in Iowa 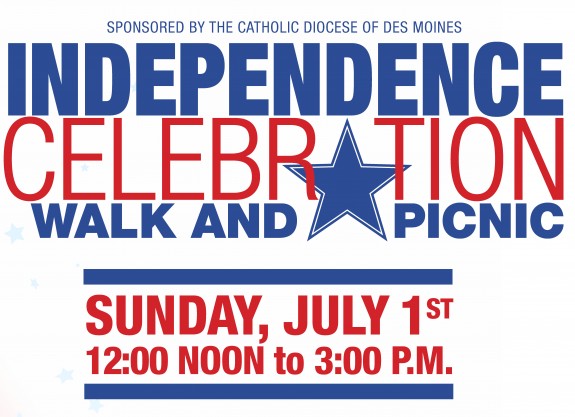 Details, from the Des Moines Register:

Thousands walked and gathered Sunday in Des Moines to stand up against what they say is government infringing on their religious freedom.

The crowd gathered at noon at the St. Ambrose Cathedral in downtown Des Moines and walked to the Iowa Capitol. The Most Rev. Richard Pates, bishop of the Diocese of Des Moines, led the group, along with Gov. Terry Branstad, who said he attended the event on his own accord.

The event was a show of solidarity with the U.S. Conference of Catholic Bishops’ “Fortnight for Freedom,” which began June 21 and will conclude on Independence Day. The two-week national campaign is intended to draw attention to what they say is the government infringement on their religious freedoms.

One of the key issues is a U.S. Department of Health and Human Services’ directive that nearly all employer health care plans – including Catholic universities and hospitals – must provide birth control and certain other medical services. The church says this requirement would include sterilizations and drugs that could cause abortions. A narrow exemption for churches exists, but moral and religious First Amendment objections continue to be issued by Catholic dioceses, universities, hospitals and charitable institutions now suing the federal government over the matter, as well as other Christian and Jewish groups.

Mike Hansman, 22 of Des Moines, split time with his father, Frank, carrying a flag behind Pates and the governor. Mike Hansman, a Ron Paul supporter, said he feels the government is intruding on people’s lives.

“The health care law is unconstitutional, I don’t care what the Supreme Court says,” he said.

Branstad said he came because he said religious liberties are under attack.

“I just wanted to show my personal support for religious liberty in this country,” he said.

Branstad was impressed with the size of the turnout on Sunday.

“I think it shows the kind of support there is, and the opposition there is, to what the health and human services department is trying to do in imposing these rules,” he said.

July 1, 2012
Did the bishop of Orlando cross the line?
Next Post

July 1, 2012 The "10 Commandments" of blogging
Browse Our Archives
Follow Us!

Closing Houses of Worship During a...
A Little Bit of Nothing
Books by This Author Books by Deacon Greg Kandra

Rome Issues new Mass prayers in Time of...
Rome has issued prayers for a "Mass in Time of Pandemic."  Priests...
view all Catholic blogs
Copyright 2008-2020, Patheos. All rights reserved.