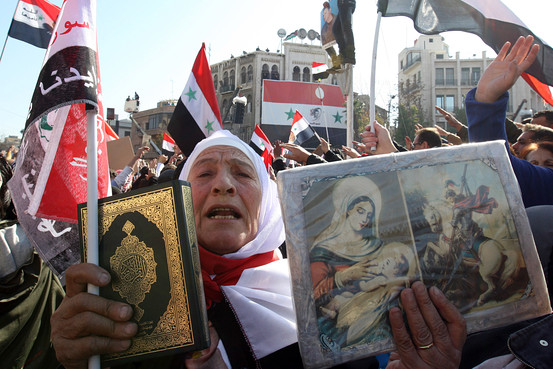 It’s a question being examined in this morning’s Wall Street Journal:

Near the Syrian city of Aleppo, the Church of St. Simeon the Stylite commemorates the 5th-century ascetic who became an ancient sensation by living atop a tall pedestal for decades to demonstrate his faith. Krak des Chevaliers, an awe-inspiring castle near Homs, was a fortress for the order of the Knights Hospitaller in their quest to defend a crusader kingdom. Seydnaya, a towering monastery in a town of the same name, was probably built in the time of Justinian.

A nun there spoke about Syria’s current crisis from within a candlelit alcove this week, surrounded by thousand-year-old votive icons donated by Russian Orthodox churchgoers and silver pendants in the shape of body parts that supplicants have sought to heal—feet, heads, legs, arms, even a pair of lungs and a kidney.

“It’s not a small thing we are facing,” she said, speaking as much about the country as her faith. “We just want the killing to stop.”

Few places are as central as Syria to the long history of Christianity. Saul of Tarsus made his conversion here, reputedly on the Street Called Straight, which still exists in Damascus. It was in these lands that he conducted his first missions to attract non-Jews to the nascent faith.

A century ago, the Levant supported a population that was perhaps 20% Christian. Now it is closer to 5%. Syria today hosts vibrant, if dwindling, communities of various ancient sects: Syrian Orthodox, Syrian Catholics, Greek Orthodox, Greek Catholics and Armenian Orthodox.

But Syria’s Christian communities are being severely tested by the uprising that has racked the country for more than a year. They think back to 636, when the Christian Byzantine emperor Heraclius saw his army defeated by Muslim forces south of present-day Damascus. “Peace be with you Syria. What a beautiful land you will be for our enemies,” he lamented before fleeing north to Antioch. In the 8th century, a famed Damascus church was razed to make way for the Umayyad Mosque—today one of Islam’s holiest sites.

Not a few Christians in modern-day Syria worry that the current crisis could end the same way for them if Bashar al-Assad and his regime are defeated by the rebel insurgency.

August 13, 2012
LA Times: Ryan's budget a "quandary" for some Catholics
Next Post

August 13, 2012 "Marriage is a mess and homosexuals didn't do it"
Browse Our Archives
get the latest from
Catholic
Sign up for our newsletter
POPULAR AT PATHEOS Catholic
1