Fr. Benedict Groeschel on child sex abuse: “A lot of cases, the youngster is the seducer” — UPDATED

N.B.  The National Catholic Register has evidently pulled the interview excerpted below from its site.  It’s no longer available online.

The celebrated friar (and psychologist) has some shocking things to say about sex abuse and the Catholic Church in this interview with the National Catholic Register:

Part of your work here at Trinity has been working with priests involved in abuse, no? 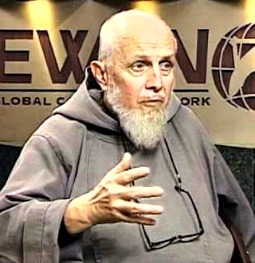 A little bit, yes; but you know, in those cases, they have to leave. And some of them profoundly — profoundly — penitential, horrified. People have this picture in their minds of a person planning to — a psychopath. But that’s not the case. Suppose you have a man having a nervous breakdown, and a youngster comes after him. A lot of the cases, the youngster — 14, 16, 18 — is the seducer.

Why would that be?

Well, it’s not so hard to see — a kid looking for a father and didn’t have his own — and they won’t be planning to get into heavy-duty sex, but almost romantic, embracing, kissing, perhaps sleeping but not having intercourse or anything like that.

It’s an understandable thing, and you know where you find it, among other clergy or important people; you look at teachers, attorneys, judges, social workers. Generally, if they get involved, it’s heterosexually, and if it’s a priest, he leaves and gets married — that’s the usual thing — and gets a dispensation. A lot of priests leave quickly, get civilly married and then apply for the dispensation, which takes about three years.

But there are the relatively rare cases where a priest is involved in a homosexual way with a minor. I think the statistic I read recently in a secular psychology review was about 2%. Would that be true of other clergy? Would it be true of doctors, lawyers, coaches?

Here’s this poor guy — [Penn State football coach Jerry] Sandusky — it went on for years. Interesting: Why didn’t anyone say anything? Apparently, a number of kids knew about it and didn’t break the ice. Well, you know, until recent years, people did not register in their minds that it was a crime. It was a moral failure, scandalous; but they didn’t think of it in terms of legal things.

If you go back 10 or 15 years ago with different sexual difficulties — except for rape or violence — it was very rarely brought as a civil crime. Nobody thought of it that way. Sometimes statutory rape would be — but only if the girl pushed her case. Parents wouldn’t touch it. People backed off, for years, on sexual cases. I’m not sure why.

I think perhaps part of the reason would be an embarrassment, that it brings the case out into the open, and the girl’s name is there, or people will figure out what’s there, or the youngster involved — you know, it’s not put in the paper, but everybody knows; they’re talking about it.

At this point, (when) any priest, any clergyman, any social worker, any teacher, any responsible person in society would become involved in a single sexual act — not necessarily intercourse — they’re done.

And I’m inclined to think, on their first offense, they should not go to jail because their intention was not committing a crime.

There’s much more.  Read it all.

UPDATE: I’m frankly shocked that the Register, which is owned by EWTN, would allow these kinds of outrageous statements to be published.   (It’s also surprising that the interviewer didn’t challenge Fr. Groeschel’s assertions.) Two possibilities present themselves.  Either the Register’s editor was asleep at the switch, and didn’t read this before it went to press; or, more troubling, maybe nobody saw anything wrong with what he said.

Fr. Groeschel might want to spend some time – there are week’s worth, if not more, of material to peruse – on the bishopaccountability.com Web site. There he’ll find transcripts, letters from bishops, depositions, court transcriptions and grand jury reports that should go rather far in convincing him that the primary problem with the sex abuse scandal among Catholic clergy was not seductive eight, nine and 10-year-olds. Not even 14-18- year olds.

The paper in which the interview appeared – the National Catholic Register – was once owned by the Legion of Christ. Don’t go looking into their files for any truth on the life of the late Marciel Maciel Degollado, founder of the order, at least while the publication was under control of the Legion. It has since been sold – part of the selloff of the order’s assets – to EWTN. It is heartening to see that the current readers also find Groeschel’s comments about abuse deeply disturbing….

….The scandal is perpetuated because the church, particularly in the person of its bishops, has gone to great lengths to conceal the truth over decades. Attempting now to alter the truth of the matter and to place the blame on the victims will only re-open old wounds and paint the church anew as an institution incapable of dealing with its own sin.

August 29, 2012
Three's company in Brazil, with civil union between three people
Next Post

August 29, 2012 Paul Ryan: "Each one of us bears the image and likeness of the Lord of Life"
Browse Our Archives
get the latest from
Catholic
Sign up for our newsletter
POPULAR AT PATHEOS Catholic
1