A wedding announcement in this Sunday’s New York Times:

Roger Thomas Danforth and Richard James Termine were married Friday evening in New York. The Rev. David C. Parsons, a Lutheran minister, officiated aboard the Lexington, a chartered yacht, on the East River, with the Rev. Michael DeVito, a Roman Catholic priest and a cousin of Mr. Termine, assisting. 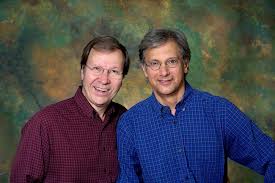 Mr. Danforth, 63, is the artistic director of the Directors Project, a career development program for theater directors run by the Drama League, a New York organization dedicated to professional theater. He is also a freelance director.

He graduated from Western Michigan University and received a master’s degree in directing from Florida State University. He is a son of the late Arline H. Danforth and the late Herbert R. Danforth Jr., who lived in Palm Harbor, Fla.

Mr. Termine, 59, is a freelance photographer in New York. He has done work for the Lincoln Center for the Performing Arts, Carnegie Hall and the 92nd Street Y. He is also the on-set photographer for “Sesame Street,” and is on the board of the Jim Henson Foundation in New York.

He graduated from the University of Connecticut, from which he also received a master’s degree in puppetry. He is a son of Marie L. Termine of Middletown, Conn., and the late Rosario T. Termine.

The couple’s wedding took place on the 30th anniversary of their meeting at a performance of “A Midsummer Night’s Dream” at the Delacorte Theater in Central Park.

I mentioned this to a couple priests today.  They suggested that Fr. DeVito might have been just a guest at the wedding or, perhaps, someone who had been laicized but still calls himself a priest.

Maybe there’s a reasonable explanation for this.  If so, I’d like to hear it.

August 19, 2012
First of its kind: New Orleans opens house of discernment for women
Next Post

August 19, 2012 Mitt at prayer: Mormon reporter covers his trip to Mormon church service—UPDATED
Browse Our Archives
get the latest from
Catholic
Sign up for our newsletter
POPULAR AT PATHEOS Catholic
1

Immigration delays lead to forced departure of priests
I recently read an article stating that the Diocese of Burlington in...
view all Catholic blogs
Copyright 2008-2021, Patheos. All rights reserved.
error: Content is protected !!