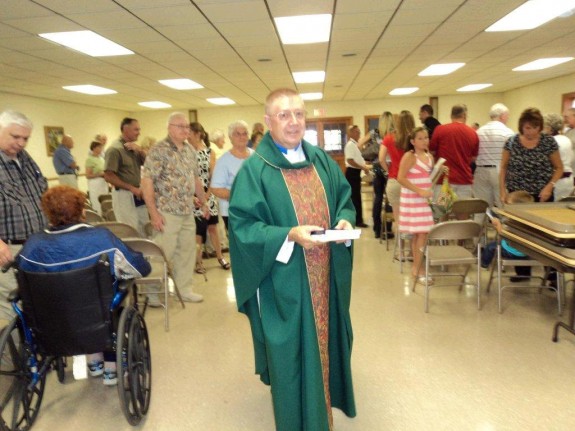 An interesting—and rare— case, from the Milwaukee Journal-Sentinel:

A Milwaukee-area Catholic priest sanctioned this year for indirectly violating the seal of the confessional now faces excommunication after launching a new parish with a breakaway diocese a few miles away.

Father David Verhasselt, once a popular priest at St. Catherine of Alexandria Parish in Oconomowoc, was named pastor this month at the newly founded Holy Name of Jesus Evangelical Catholic Church in nearby Ashippun, taking at least some of his former parishioners with him.

The Archdiocese of Milwaukee said Verhasselt will be given an opportunity to reverse his decision and would incur “immediate excommunication” if he does not.

Verhasselt has declined repeated requests to be interviewed. But the Chicago-based Evangelical Catholic Diocese of the Northwest said he withdrew from the Roman Catholic Church in accordance with canon law.

“For the record, the Roman Catholic Church cannot declare a former member of its body ‘excommunicated’ after the fact,” it said in an email to the Journal Sentinel. “We are currently residing within the 21st century.”

Verhasselt’s departure is forcing a gut-wrenching decision for at least some of his former parishioners, many of whom still believe he was unjustly accused of breaching the confessional. Do they stay at St. Catherine’s or follow Verhasselt to his new spiritual home outside the Roman Catholic Church?

“I’m on the fence. I’ve been Roman Catholic and gone to church all my life. But I also love Father Dave,” said June Sawant.

“He’s the most wonderful man, so kind, so caring … he was born to be a priest.”

Those who follow a schismatic priest could face excommunication themselves, depending on the circumstances, according to canon lawyers. But that is unlikely to occur without a clear warning from the archbishop, said Father James Connell, a canon lawyer and former vice chancellor of the archdiocese.

No such warning has been issued.

Excommunication bars one from receiving the sacraments; it does not strip one of membership in the church, according to Connell.

“And the door remains open to repentance,” he said. “There is always the hope that they will return.”

Verhasselt had been on leave from St. Catherine’s since April 2010 after allegedly violating the seal of confessional, a charge many of his supporters believed was trumped up as the result of an ongoing feud with a priest in another parish.

Milwaukee Archbishop Jerome Listecki found Verhasselt guilty in March of an “indirect” violation – betraying the sin, but not necessarily the sinner – and sentenced him to a year of prayer and penance.

Verhasselt’s appeal to the Vatican’s Congregation for the Doctrine of the Faith was pending when he resigned to join the Chicago-based Evangelical Catholic Church, a small, dissident denomination not in communion with Rome.

Founded in 1995, the Evangelical Church has 17 parishes or missions in the United States and Ireland, according to spokesman Bill Morton.

It bills itself as “a welcoming community of faith rooted in the Catholic tradition,” but it breaks with Rome in key areas, including the ordination of women, allowing married and gay clergy, and in offering the sacrament of marriage to same-sex couples.

August 22, 2012
Cardinal Dolan to give benediction at GOP convention
Next Post

August 23, 2012 Wyoming’s booming diaconate
Browse Our Archives
get the latest from
Catholic
Sign up for our newsletter
POPULAR AT PATHEOS Catholic
1

A Tip to Remember for your Winter Clothing...
A lot of you are probably taking part in clothing drives...
view all Catholic blogs
Copyright 2008-2021, Patheos. All rights reserved.