A glimpse inside the synod: what some bishops are talking about

A glimpse inside the synod: what some bishops are talking about October 13, 2012 Deacon Greg Kandra 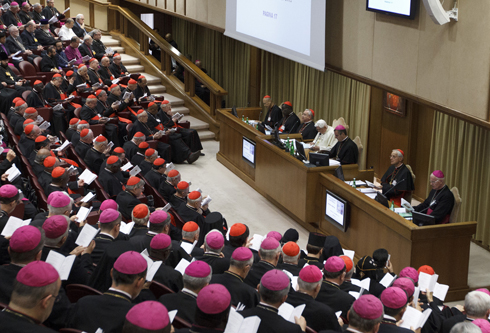 Several interventions underscored the close relationship between the new evangelization and the church’s social teaching. It was asserted that it is essential that the church be committed to the poor and marginalized and that commitment inspires others to embrace Christ.

When one cares for the other, it draws people to Christ. Pastoral works of charity are alive and an instrument of evangelization. Those who receive the testimony of charity are moved to the faith. People are struck by the church’s self-less concern for others. We make known through works of charity the God who is charity. The Scriptures were quoted, “By this will people know you are my disciples, by the love you show others.” As Pope Benedict has said, when one becomes aware that God loves me that one can love others. Charitable activity of the church is not about proselytizing but living as Christ lived, serving and healing others. In Latin America and the Caribbean  living the social gospel has played a critical role addressing poverty and inequality. This doctrine has led to hope. It is important the church ratify the preferential option for the poor.

Another intervention commented on the need to address the purification of popular piety which, while it can foster faith, can slip into superstition. It falls upon the priest to educate and form the community to foster true popular piety while maintaining the centrality of the Eucharist and the sacraments.

Some comments reflected on the importance of mass media as a great opportunity and support to spread the gospel. There needs to be a larger Christian presence in modern media. It can be an instrument to carry the teaching of the church and the proclamation of Jesus Christ.

Some bishops spoke of the new agents of evangelization — the youth. Youth must evangelize youth. They also called for an expanded role of the laity in realizing the new evangelization. It was said that the laity must be more courageous and forthright in proclaiming the Gospel and its values. We must understand better the secular culture and engage it, especially by the efforts of the laity.

One bishop called for increased dialogue between Christians and Muslims respecting the rights of all as full citizens of their countries. Now there are only secret conversions for Muslims to become Christian. There are unjustified aggressions against Christians. There must be a true Arab spring that brings peace and harmony.

Some introduced a discussion of the age of Confirmation, a neuralgic issue in the church. Some felt the linkage of the sacraments of initiation should be restored while others felt it was important to prepare young people for the Sacrament of Confirmation when they are more mature and can truly embrace the faith. In fact there appears to be no time when the order of Sacraments of Initiation was common across the church. The need for mystagogia in the U.S. for the young is so important and makes a person catechized to receive the sacrament.

We have been listening to a wide range of directions for realizing the new evangelization from the importance of family, the parish, small-faith communities, movements, the catechist, to the need to evangelize the evangelizers including seminarians and priests, to the importance of mass media to communicate the church’s message, to the centrality of works of charity, to the youth as the new evangelizers, to the need to empower the laity to transform the world, to the need for increased intereligious dialogue. Clearly these themes are important.

There’s much more.  Read it all. And check back often for updates.

October 13, 2012
Making a splash: California gets ready for annual Blessing of the Waves
Next Post

October 13, 2012 "Is it a rule that you have to give the sign of peace...?"
Browse Our Archives
get the latest from
Catholic
Sign up for our newsletter
POPULAR AT PATHEOS Catholic
1