Benedict on Vatican II: “I remember I was a young professor of theology…” 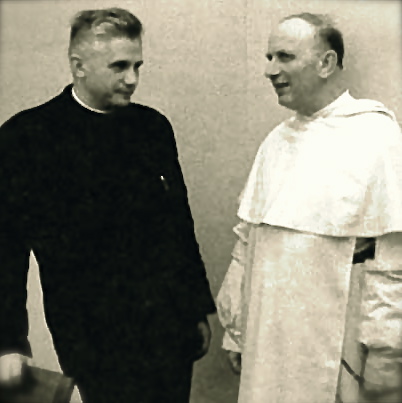 Pope Benedict spoke eloquently and very personally about tomorrow’s anniversary of the opening of Vatican II. [He is shown above with Yves Congar during the council.] Below is the text of his remarks from today’s General Audience. — DGK

We are on the eve of the day when we will celebrate the fiftieth anniversary of the opening of the Ecumenical Council Vatican II and the beginning of the Year of Faith. With this Catechesis I would like to begin to reflect – with some brief thoughts – on the great ecclesial event that was the Council, an event of which I was a direct witness. It, so to speak, appears to us like a giant fresco, painted in its great diversity and variety of elements, under the guidance of the Holy Spirit. And just like before a great work of art, still today we continue to grasp that moment of grace, that extraordinary richness, to rediscover particular passages, fragments, pieces.

Blessed John Paul II, on the threshold of the third millennium, wrote: “I feel more than ever in duty bound to point to the Council as the great grace bestowed on the Church in the twentieth century: there we find a sure compass by which to take our bearings in the century now beginning” (Apostolic Letter. NMI, 57). I think this is telling. The documents of the Second Vatican Council, to which we must return freeing them from a mass of publications that often instead of making them known, have hidden them, are, for our time, a compass that allows the ship of the Church to set sail, in midst of storms or calm and quiet waters, to navigate safely and reach port.

I remember I was a young professor of fundamental theology at the University of Bonn at that time, and it was the Archbishop of Cologne, Cardinal Frings, a human and priestly point of reference for me, who took me with him to be his consultant theologian, later I was also appointed a council expert. It was a unique experience for me, after all the fervor and enthusiasm of preparation, I could see a living Church – almost three thousand Council Fathers from all parts of the world gathered under the guidance of the Successor of the Apostle Peter – at the school of the Holy Spirit, the true driving force of the Council. Rarely in history have we been able, as then, to almost concretely “touch” the universality of the Church at a time of great accomplishment of its mission to bring the Gospel to all ages and to the ends of the earth. These days, if you see once again the images of the opening of this great Gathering, on television or other media, you too will be able to feel the joy, hope and encouragement taking part in this event of light gave to all of us, a light which radiates still today.

In the history of the Church, as I think you know, various councils have preceded the Second Vatican Council. Usually these large ecclesial assemblies were convened to define key elements of the faith, especially to correct errors that put her in danger. We think of the Council of Nicaea in 325, to counter the Arian heresy and to emphasize the divinity of Jesus, as the only Son of God the Father, or that of Ephesus in 431, which defined Mary as the Mother of God; the Council of Chalcedon, in 451, which affirmed the one person of Christ in two natures, the divine and the human person. Closer to our time, we have the Council of Trent in the sixteenth century, which clarified the essential points of Catholic doctrine before the Protestant Reformation, or Vatican I, which began to reflect on various issues, but had time to produce only two documents, one on knowledge of God, revelation, faith and relationships with reason and one on the primacy and infallibility of the Pope, because it was interrupted by the occupation of Rome in September 1870.

If we look at the Second Vatican Council, we can see that at that moment in the journey of the Church there were no particular errors of faith to correct or condemn, nor were there specific issues of doctrine or discipline to be clarified. Thus we can understand the surprise of the small group of cardinals in the chapter house of the Benedictine monastery of St. Paul Outside the Walls, where, on January 25, 1959, Blessed John XXIII announced the diocesan Synod for Rome and the Council for the Universal Church. The first question he asked himself in preparing for this great event was how to start it, what specific task to assign to it. Blessed John XXIII, in his opening speech, on October 11, fifty years ago, gave a general indication: faith had to speak in a “renewed”, more incisive way – because the world was rapidly changing – while keeping its perennial contents, without giving in or compromise. The Pope wanted the Church to reflect on her faith, on the truths that guide her.

But this serious, in-depth reflection on faith, had to outline the relationship between the Church and the modern age in a new way, between Christianity and some essential elements of modern thought, not to conform itself to it, but to present to our world, which tends to move away from God, the need of the Gospel in all its grandeur and in all its purity (cf. Address to the Roman Curia for Christmas greetings, December 22, 2005). The Servant of God Paul VI indicated this very well in his homily at the end of the last session of the Council – December 7, 1965 – with words that still today are most relevant, when he affirmed that in order to properly asses this event, and I quote, “it is necessary to remember the time in which it was realized. In fact, the Pope says, it took place at a time in which, everyone admits man is orientated toward the conquest of the kingdom of earth rather than of that of heaven; a time in which forgetfulness of God has become habitual, and seems, quite wrongly, to be prompted by the progress of science; a time in which the fundamental act of the human person, more conscious now of himself and of his liberty, tends to pronounce in favor of his own absolute autonomy, in emancipation from every transcendent law; a time in which secularism seems the legitimate consequence of modern thought and the highest wisdom in the temporal ordering of society;… it was at such a time as this that our council was held to the honor of God, in the name of Christ and under the impulse of the Spirit”. Thus said Paul VI. He concluded by indicating in the question of God the central focus of the Council, that God, I quote again, that ” He is real, He lives, a personal, provident God, infinitely good; and not only good in Himself, but also immeasurably good to us. He will be recognized as Our Creator, our truth, our happiness; so much so that the effort to look on Him, and to center our heart in Him which we call contemplation, is the highest, the most perfect act of the spirit, the act which even today can and must be at the apex of all human activity”(AAS 58 [1966], 52-53).

We can see how the time in which we live continues to be marked by forgetfulness and deafness towards God. I think, then, that we must learn the simplest and most basic lesson of the Council, namely that Christianity in its essence consists in faith in God, which is love of the Trinity, and in the encounter, both personal and community, with Christ who directs and guides life: from which everything else follows. The important thing today, just as it was the desire of the Council Fathers, is that we can once again see – clearly – that God is present, He takes care of us, He answers us. And that, instead, when there is no faith in God, what is essential collapses, because man loses his profound dignity and that which makes his humanity great, against all reductionism. The Council reminds us that the Church, in all its components, has the duty, the mandate to transmit the Word of God that saves, so that the Divine call, which contains our eternal blessing, can be heard and welcomed.

Looking in this light at the richness contained in the documents of Vatican II, I would like to mention the four constitutions, almost like the four points of a compass that can guide us. The Constitution on the Sacred Liturgy Sacrosanctum Concilium tells us how to worship in the Church at the beginning is adoration, there is God, there is the centrality of the mystery of Christ’s presence. And the Church, the Body of Christ and a pilgrim people in all ages, has the fundamental task to glorify God, as expressed by the Dogmatic Constitution Lumen Gentium. The third document which I would like to mention is the Constitution on Divine Revelation Dei Verbum: the living Word of God calls the Church and vivifies her along the journey through history. And the way in which the Church brings the light she has received from God the whole world so He may be glorified, is the underlying theme of the Pastoral Constitution Gaudium et Spes.

The Second Vatican Council is a strong call for us to rediscover the beauty of our faith every day, to know nourish a deeper understanding of it, a more intense relationship with the Lord, to truly live our Christian vocation. May the Virgin Mary, Mother of Christ and of the whole Church, help us to realize and to fulfil all that the Council Fathers, inspired by the Holy Spirit, guarded in their heart: the desire that all may know the Gospel and meet the Lord Jesus as the Way, the Truth and the Life. Thank you.

October 11, 2012 "Shocker" at synod: archbishop speaks out about women and discrimination
Browse Our Archives
Follow Us!

Something to Completely Blow Your Mind for a...
Do you know what John Wayne's last film was? Wrong! It was...
view all Catholic blogs
Copyright 2008-2020, Patheos. All rights reserved.