Biden defines “the civil rights issue of our time” 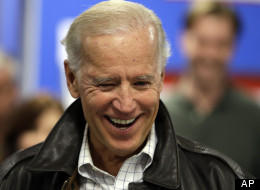 Vice President Joe Biden said transgender discrimination is “the civil rights issue of our time” during a visit to a Florida field office on Tuesday, according to pool reports.

Biden was meeting with volunteers at an Obama for America office in Sarasota, Fla., when he singled out one woman “who he thought had beautiful eyes,” reads the pool report. The woman said something to Biden that was inaudible to the pool reporter, but Biden responded to her by saying it was the “civil rights issue of our time.”

The woman, Linda Carragher Bourne of Sarasota, later said her daughter was Miss Trans New England and that she had asked Biden if he would help them.

“A lot of my friends are being killed, and they don’t have the civil rights yet. These guys are gonna make it happen,” Bourne told the reporter.

October 31, 2012
"Within our darkest nights, you kindle a fire that never dies away..."
Next Post

October 31, 2012 Homily for November 1, 2012: All Saints Day
Browse Our Archives
get the latest from
Catholic
Sign up for our newsletter
POPULAR AT PATHEOS Catholic
1