No soup for you: Ohio Catholic charity upset about Ryan photo op 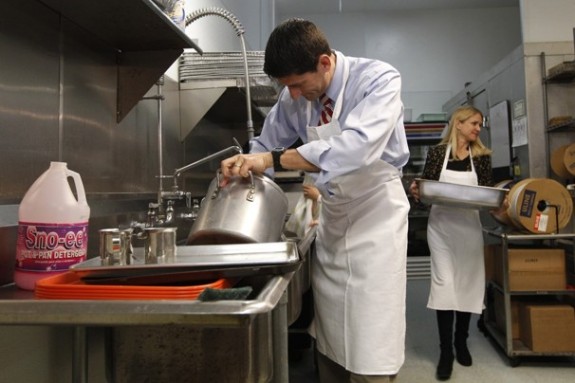 The food had been served, the patrons were long gone, and the cutlery cleaned when Rep. Paul Ryan, his wife, three kids and photographers pulled up Saturday at a St. Vincent de Paul food kitchen in Youngstown Ohio.

Ryan and his wife put on aprons and washed several pans that already appeared to be clean, and then were off to the airport.

Now, the Republican vice presidential candidate is in hot water over the impromptu campaign “photo op.”  The director of the Mahoning County, Ohio, St. Vincent de Paul Society says he was not contacted and that the food kitchen does not serve up candidates.

“We’re a faith-based organization:  We are apolotical because the majority of our food is from private donations,” Brian Antol told The Washington Post.  “It’s strictly in our bylaws not to do it.  They showed up there and they did not have permission.  They got one of the volunteers to open up the doors.

“The photo op they did wasn’t even accurate.  He did nothing.  He just came in here to get his picture taken at the dining hall.”

The Ryan campaign explained that it sent ahead a staffer, who was told by a volunteer that the visit would be welcome.

“Our campaign and Congressman Ryan were pleased to bring attention to the meaningful charitable contribution the St. Vincent de Paul Society makes to people in need,” said Chris Maloney, Ohio communications director for the Romney-Ryan ticket.

October 16, 2012 Missing from the synod: deacons
Browse Our Archives
Follow Us!

A Skeptic's Guide to Fasting for Relief from...
I am a Christian who questions everything. Every day, in every moment,...
view all Catholic blogs
Copyright 2008-2020, Patheos. All rights reserved.