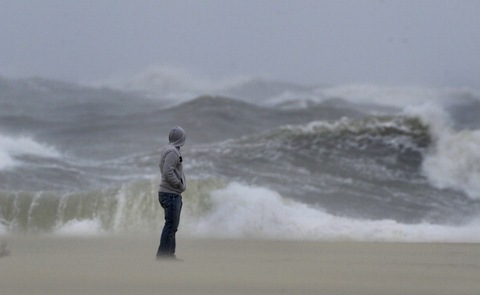 We could see this coming, couldn’t we?

Hurricane Sandy continues to pummel the coastal Atlantic region as the historic “superstorm” makes its way up the East Coast. The death toll has risen to at least 65, and the damage may cost as much as $55 billion, but the Westboro Baptist Church is thanking God for the storm.

Shirley Phelps-Roper, daughter of Westboro pastor Fred Phelps, has spewed a series of tweets about Hurricane Sandy since the storm first brewed in the Caribbean last week. “God sent the whirlwind. #ThankGodForRighteousJudgment,” Phelps-Roper tweeted after deaths were announced in Cuba.

She went on to target specific states in Sandy’s path, including Connecticut and Delaware, both of which have legalized same-sex marriage. The Westboro Baptist Church, an independent Baptist church based in Topeka, Kan., is infamous for protesting funerals of members of the armed forces because gays are allowed to serve.

The Westboro heir described Hurricane Sandy as the “wrath from God hangs over NY and Doomed USA like a Sword or Damocles.” She also mentioned the Hawaii tsunami and a Nebraska wildfire as signs from God.

“The church’s 75 members, most of whom are related to Phelps, seize upon disasters and calamities, including roadside bombs in Iraq, the attacks of 9/11, Hurricane Katrina and the recent mining deaths in West Virginia, as God’s punishment for a country that tolerates gays,” MSNBC’s John Belzman wrote in 2008.

And that’s not all:

One right-wing Christian preacher is already pointing the finger at the lesbian, gay, bisexual and transgender (LGBT) community.

In a wordy and occasionally rambling blog on his website, chaplain John McTernan seems to link Hurricane Sandy (and a number of other recent weather-related trends and natural disasters) on LGBT people and President Barack Obama’s recent backing of marriage equality. While most of McTernan’s wrath is directed at Obama, he has some choice words for GOP candidate Mitt Romney, too.

“God is systematically destroying America,” McTernan writes. “Just look at what has happened this year.”

Calling Sandy “the most powerful hurricane on record” that “could do catastrophic damage to the entire Northeast,” McTernan adds, “Obama is 100 percent behind the Muslim Brotherhood which has vowed to destroy Israel and take Jerusalem. Both candidates are pro-homosexual and are behind the homosexual agenda. America is under political judgment and the church does not know it!”

You can read the full blog here.

If any Christian leaders tomorrow say that the hurricane represents God’s punishment of, or judgment against, a particular person or group or political party, they’re wrong. As Jesus shows us, God is not vengeful, but rich in mercy. And God’s ways are not our ways. The rain falls on the just and the unjust; and the winds batter the houses of the moral and immoral. Instead of trying to peer into the mind of the unknowable God, ask to grow in charity towards those who will be affected by the wind and the waves.

He also has some thoughtful reflections on the storms of life, and God’s presence in them, at the America blog. Check it out.

October 29, 2012
How Dan Rather helped invent modern hurricane coverage on TV in 1961
Next Post

October 29, 2012 Before and after
Browse Our Archives
get the latest from
Catholic
Sign up for our newsletter
POPULAR AT PATHEOS Catholic
1