Anybody else find the timing of this interesting?

The United States Ambassador to the Holy See made a farewell visit to Pope Benedict XVI today. 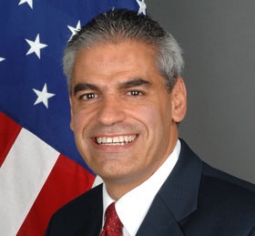 An embassy spokesman said he would probably be leaving Rome at the weekend to take up a teaching position at the University of Dayton, OH.

The embassy said the move had been in the pipeline for a while, and that it had planned to announce the ambassador’s departure after the Presidential Elections tomorrow, but as the farewell visit took place today, the Vatican pre-empted the disclosure by making an announcement in its daily bulletin. Ambassador Diaz, who was formally sworn in on August 21st, 2009, has nevertheless fulfilled the usual term for ambassadors which is commonly two to three years.

A married father of four, Ambassador Diaz was the first Hispanic to represent the United States at the Vatican. Born in Havana, Cuba, he moved as a child to the United States, where he would eventually become professor of theology at the College of Saint Benedict in St. Joseph, Minnesota, and Saint John’s University in Collegeville, Minnesota. He has also previously taught at the University of Dayton. As professor, he specialized in the works of the theologian, Karl Rahner.

November 5, 2012
"We must rediscover the human dimension of our communication..."
Next Post

November 5, 2012 "I didn't leave the Democrats. They left me."
Browse Our Archives
Follow Us!