A Christmas carol about mass murder? 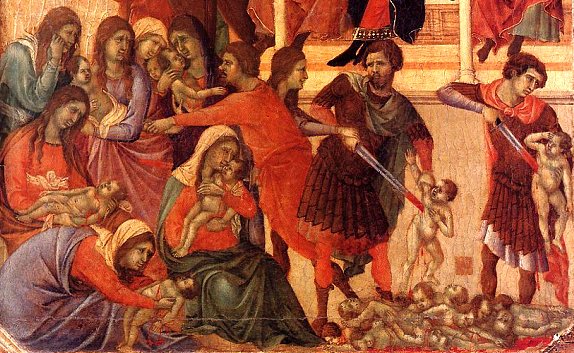 Yes. It traditionally commemorates today’s feast and has a tragic resonance right now:

The “Coventry Carol” is a Christmas carol dating from the 16th century. The carol was performed in Coventry in England as part of a mystery play calledThe Pageant of the Shearmen and Tailors. The play depicts the Christmas story from chapter two in the Gospel of Matthew. The carol refers to the Massacre of the Innocents, in which Herod ordered all male infants under the age of two in Bethlehem to be killed. The lyrics of this haunting carol represent a mother’s lament for her doomed child. It is the only carol that has survived from this play.

It is notable as a well-known example of a Picardy third. The author is unknown. The oldest known text was written down by Robert Croo in 1534, and the oldest known printing of the melody dates from 1591.[1] The carol is traditionally sung a cappella. There is an alternative setting of the carol by Kenneth Leighton.

The only manuscript copy to have survived into recent times was burnt in 1875.[2] Our knowledge of the lyrics is therefore based on two very poor quality transcriptions from the early nineteenth century, and there is considerable doubt about many of the words. Some of the transcribed words are difficult to make sense of: for example, in the last verse “And ever morne and may For thi parting Neither say nor singe” is not clear. Various modern editors have made different attempts to make sense of the words, so such variations may be found as “ever mourn and say”, “every morn and day”, “ever mourn and sigh”. The following is one attempted reconstruction.

O sisters too, how may we do,
For to preserve this day
This poor youngling for whom we do sing
Bye, bye, lully, lullay.

Herod, the king, in his raging,
Charged he hath this day
His men of might, in his own sight,
All young children to slay.

That woe is me, poor Child for Thee!
And ever mourn and sigh,
For thy parting neither say nor sing,
Bye, bye, lully, lullay.

A haunting performance, below:

December 28, 2012
6 things that struck me about "Les Miserables"
Next Post