Former Bishop Walter F. Sullivan, a progressive leader in the U.S. Roman Catholic church and the longest-serving head of the Richmond diocese, died Tuesday. He was 84. 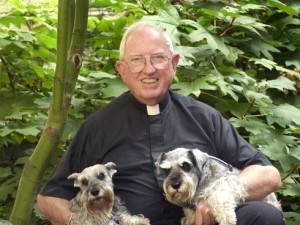 Sullivan, who had been diagnosed with liver cancer, died at home, said Judy Lindfors, assistant editor of The Catholic Virginian.

He spent the majority of his life serving the church, including 29 years as bishop of the sprawling Richmond diocese and 21 years before that as a priest.

As the 11th bishop to head the Richmond diocese, Sullivan was known as one of the more progressive leaders in the Catholic church. He caused controversy by opening his churches to gays and lesbians, condemning wars in Vietnam and the Middle East and speaking out against the death penalty.

Under Sullivan, women found a greater role in the church as lectors and Eucharistic ministers, and seven of the diocese’s 145 parishes were run by women.

Sullivan also was instrumental in reaching out to minorities and other groups. Before he retired in 2003, the diocese had 24 advisory committees representing youth, women, homosexuals, blacks and senior citizens – all of which he consulted regularly.

The Commission on Sexual Minorities was the first official attempt by a Catholic diocese to reach out to homosexual parishioners when it was established in 1977. While it was not instantly accepted by many in the church, there were more than 40 commissions like it 20 years later.

The commission was disbanded shortly after Bishop Francis DiLorenzo took over for Sullivan in 2004.

“The word Catholic means there’s room for everyone,” Sullivan told The Associated Press in an interview in 2003. “We are united in our different cultures by our common faith.”

Sullivan’s outreach extended to other faiths, as well. He donated $50,000 of diocesan funds to the Virginia Holocaust Museum when it was being built and sat on its board of directors.

He also helped found the Church of the Holy Apostles in Virginia Beach in 1977, a joint parish of the Catholic and Episcopal dioceses. Co-pastors conducted services at side-by-side altars – one for Catholics, the other for Episcopalians. The idea was popular among military families who came from different backgrounds and religions.

A man of the Gospel, he sought to “Unite All in Christ,” and was a priest who stood for justice, compassion and peace.

Funeral arrangements are pending at this time.

December 12, 2012 "Never stop searching"
Browse Our Archives
get the latest from
Catholic
Sign up for our newsletter
POPULAR AT PATHEOS Catholic
1