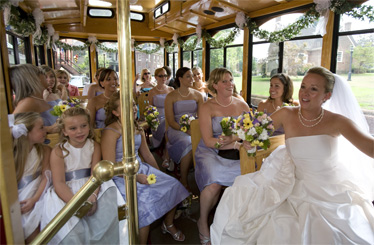 Details, from the Baltimore Sun:

An Annapolis company whose old-fashioned trolleys are iconic in the city’s wedding scene has abandoned the nuptial industry rather than serve same-sex couples.

The owner of Discover Annapolis Tours said he decided to walk away from $50,000 in annual revenue instead of compromising his Christian convictions when same-sex marriages become legal in Maryland in less than a week. And he has urged prospective clients to lobby state lawmakers for a religious exemption for wedding vendors.

While most wedding businesses across the country embraced the chance to serve same-sex couples, a small minority has struggled to balance religious beliefs against business interests.

“If they’re providing services to the public, they can’t discriminate who they provide their services to,” said Glendora Hughes, general counsel for the Maryland Commission on Civil Rights. The commission enforces public accommodation laws that prohibit businesses from discriminating on the basis of race, sexual orientation and other characteristics.

The trolley company’s decision, publicized by a straight groom offended by what he called “repressive bigotry,” offers a snapshot of a local business navigating a new landscape in Maryland’s wedding industry, and leaving it behind for a competitor to swoop in.

The head of the Maryland Wedding Professionals Association said the trolley company is the second vendor to refuse business over the state’s same-sex marriage law, which voters upheld in November. The Maryland clergyman who led opposition to same-sex marriage called the trolley company’s choice to abandon profits on principle “gutsy” and predicted that more businesses would quietly follow suit.

“That’s a bold and noble statement,” said Derek McCoy, executive director of the Maryland Marriage Alliance. “The other option would have been just to become a legal case.”

December 27, 2012
Beyond stigma: a deacon who ministers to the mentally ill
Next Post

December 28, 2012 6 things that struck me about "Les Miserables"
Browse Our Archives
Related posts from The Deacon's Bench