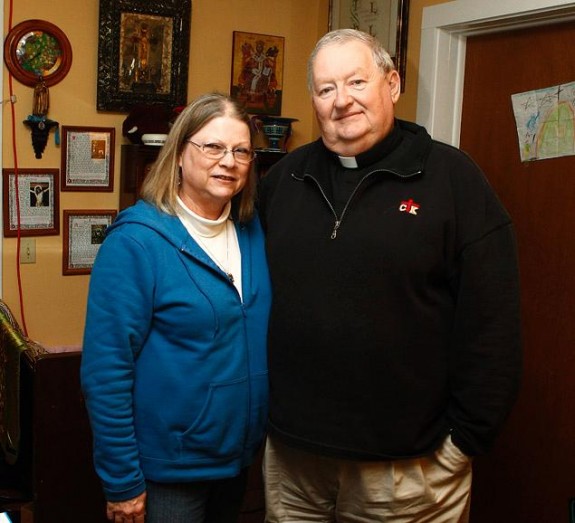 I posted on him a few days ago.  Now, some more details, from the New York Daily News:

John Cornelius will be ordained a Roman Catholic priest this weekend — and with the blessing of his wife they’re giving up their sex life.

Cornelius, a father of three, will become the first married Roman Catholic priest in New York — and Sharyl, his wife of 33-years, has agreed to the whole celibacy thing.

“We have decided to do that voluntarily,” Cornelius told WGRZ-TV. “I have always had friends that are Roman Catholic priests and I appreciate what they’ve given up to serve God and the priesthood.”

Cornelius, 64, is a former Episcopalian priest who converted three years ago to Catholicism. He said his old church had gotten too liberal for him.

“There was the ordination of the homosexual priest in New England,” he said. “Then it came time for women’s ordination. … It may have been okay for other people, but it was just too much for me.

“I needed someplace where there was order,” he added.

UPDATE:  The paper refers to what Deacon Cornelius is doing as taking a “vow of celibacy.”  Uh, no.  As a couple readers have pointed out, a married man can’t do that, since celibacy is the unmarried state and he is, unquestionably, married. And there’s nothing in the ordination rite that addresses what he is planning to do.  If anything, it appears, the man about to be ordained to the priesthood is making a private promise to his wife—a promise that he’s now made public in the press, and which the press, of course, is not really reporting accurately.  (I changed my headline on the original post, btw, to correctly reflect that…)

UPDATE II: The interview where he discusses this and more is below.

UPDATE III: Canon lawyer Ed Peters has some thoughts, too. Read on.