Pope to Rome’s priests: “I will always be close to all of you…” 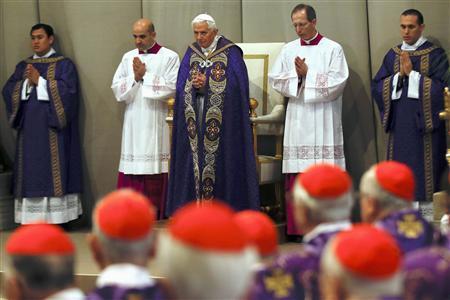 Pope Benedict XVI is meeting parish priests and clergy of the Diocese of Rome in Paul VI Hall at the Vatican. Led by Cardinal Vicar Agostino Vallini and auxiliary bishops, they greeted Benedict XVI with great affection and prolonged applause

“It is a special and providential gift of – began the Pope – that, before leaving the Petrine ministry, I can once again meet my clergy, the clergy of Rome. It’ s always a great joy to see how the Church lives, and how in Rome, the Church is alive: there are pastors who in the spirit of the supreme Shepherd, guide the flock of Christ”.

“It is a truly Catholic and universal clergy,” – he added – “and is part of the essence of the Church of Rome itself, to reflect the universality, the catholicity of all nations, of all races, of all cultures”.

“At the same time I am very grateful to the Cardinal Vicar who is helping to reawaken, to rediscover the vocations in Rome itself, because if on the one hand Rome is the city of universality, it must be also a city with its own strong, robust faith, from which vocations are also born. And I am convinced that with the help of the Lord we can find the vocations He Himself gifts us, guide them, help them to develop and thus help the work in the vineyard of the Lord. ”

“Today” – continued the Pope – “you have confessed the Creed before the Tomb of St. Peter: in the Year of the Faith, I see this as a very appropriate, perhaps even necessary, act, that the clergy of Rome meet at the Tomb of the Apostle of which the Lord said, ‘to you I entrust my Church. Upon you I build my Church’. Before the Lord, together with Peter, you have confessed: ‘you are Christ, the Son of the living God.’ Thus the Church grows: together with Peter, confessing Christ, following Christ. And we do this always. I am very grateful for your prayers that I have felt – as I said Wednesday – almost physically. Though I am now retiring to a life of prayer, I will always be close to all you and I am sure all of you will be close to me, even though I remain hidden to the world. ”

“For today, given the conditions of my age” – he said – “I could not prepare a great, real address, as one might expect, but rather I thought of chatting about the Second Vatican Council, as I saw it”.

The Pope began with an anecdote: “In 1959 I was appointed professor at the University of Bonn, which is attended by students, seminarians of the diocese of Cologne and other surrounding dioceses. So, I came into contact with the Cardinal of Cologne, Cardinal Frings. Cardinal Siri of Genoa, – I think it was in 1961 – had organized a series of conferences with several cardinals in Europe, and the Council had invited the archbishop of Cologne to hold a conference, entitled: “The Council and the world of modern thought.” The Cardinal invited me – the youngest of the professors – to write a project; he liked the project and proposed this text, as I had written it to the public, in Genoa”.

“Shortly after” – he continued – “Pope John invited him to come [to Rome –ed] and he was afraid he had perhaps said maybe something incorrect, false and that he had been asked to come for a reprimand, perhaps even to deprive him of his red hat … (priests laughing) Yes … when his secretary dressed him for the audience, he said: ‘Perhaps now I will be wearing this stuff for the last time… (the priests laugh). Then he went in. Pope John came towards him and hugged him, saying, ‘Thank you, Your Eminence, you said things I have wanted to say, but I had not found the words to say’ … (the priests laugh, applaud) Thus, the Cardinal knew he was on the right track, and I was invited to accompany him to the Council, first as his personal advisor, then – in the first period, perhaps in November ’62 – I was also appointed as an official perito [expert-ed] for the Council”.

Benedict XVI continued: “So, we went to the Council not only with joy, but with enthusiasm. The expectation was incredible. We hoped that everything would be renewed, that a new Pentecost really would come, a new era of the Church, because the Church was not robust enough at that time: the Sunday practice was still good, even vocations to the priesthood and religious life were already somewhat fewer, but still sufficient. But nevertheless, there was the feeling that the Church was going on, but getting smaller, that somehow it seemed like a reality of the past and not the bearer of the future. And now, we hoped that this relationship would be renewed, changed, that the Church would once again source of strength for today and tomorrow. ”

The Pope then recalled how they saw “that the relationship between the Church and the modern period was one of some ‘contrasts’ from the beginning, starting with the error in the Galileo case, “and the idea was to correct this wrong start “and to find a new relationship between the Church and the best forces in the world, “to open up the future of humanity, to open up to real progress.”

February 14, 2013 Rumor control at the Vatican—UPDATED
Browse Our Archives
Related posts from The Deacon's Bench