He made his remarks in an interview with a German newspaper.

Details from the AP: 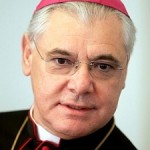 The Vatican’s head of doctrine says critics in North America and Europe are conducting a “concerted campaign” to discredit the Catholic Church that is resulting in open attacks against priests.

In an interview published Saturday by Germany newspaper Die Welt, Archbishop Gerhard Ludwig Mueller likened the sentiment directed toward the Church to that of the pogroms against Jews in Europe.

Mueller, who leads the Congregation for the Doctrine of the Faith, was quoted as saying that those attacking the Church borrow arguments used by totalitarian ideologies such as Communism and Nazism against Christianity.