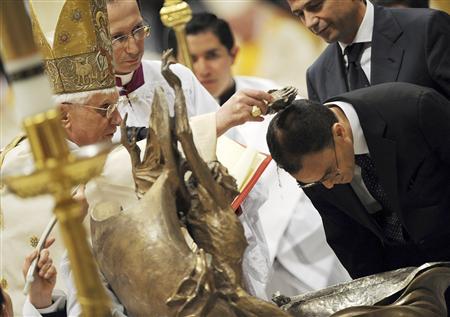 This picture of his baptism a few years ago made news around the world.  Now, he’s changed his mind. John Thavis has details:

A prominent Muslim-born journalist baptized by Pope Benedict XVI, Magdi Allam, has announced he’s leaving the church because it is too “weak with Islam.”

Allam, writing on his Web site, said the “euphoria over Pope Francis” and the rapid way Pope Benedict was set aside was “the straw that broke the camel’s back” and convinced him to abandon his conversion to Christianity.

Benedict baptized Allam in 2008 during an Easter vigil service at the Vatican, saying he wanted to inspire other former Muslims to practice Christianity openly. At the time, some of the Vatican’s Muslim dialogue partners said the high profile given to the conversion was a deliberate provocation.

Allam said that what drove him away from the church most of all was “religious relativism, in particular the legitimization of Islam as a true religion, of Allah as the true God, of Mohammed as a true prophet, of the Koran as a sacred text and of mosques as places of worship.”

He said it was “true folly” that Benedict had prayed in a mosque in Istanbul, and that Pope Francis, in one of his first speeches, said that Muslims “worship the one, living and merciful God.”

His very public departure from the church must be an embarrassment to Archbishop Rino Fisichella, who personally accompanied Allam on his path to Christianity. Fisichella was later named head of the Vatican’s new Pontifical Council for New Evangelization – presumably the council is using a more productive model of evangelizing than highly politicized “conversions” from other religions.

March 25, 2013
Have you been to confession lately?
Next Post

March 25, 2013 How Diana's funeral marked a return to "Catholic" England
Browse Our Archives
get the latest from
Catholic
Sign up for our newsletter
POPULAR AT PATHEOS Catholic
1