Lest we forget: Christ left the church in the hands of ignorant humans, not angels

Lest we forget: Christ left the church in the hands of ignorant humans, not angels March 8, 2013 Deacon Greg Kandra 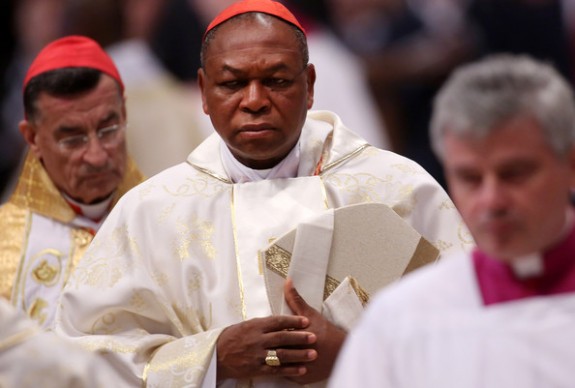 That’s one piece of wisdom from an interview by CNS with Nigeria’s Cardinal John Olorunfemi Onaiyekan:

If Jesus had wanted a church free of scandal or problems, he would have put it in the hands of angels, not a humanity he loved, said Nigeria’s newest cardinal elector.

“If you say the church needs to reform and improve, it would be the first to admit it, because the church has never reached the end of its journey; the church is always under reform,” Cardinal John Olorunfemi Onaiyekan of Abuja, Nigeria, told Catholic News Service.

Even successful changes or improvements don’t signal the job of conversion “is done and finished once and for all, because every generation has to go through its own reforms,” he said on the sidelines of pre-conclave meetings March 6.

Elevated to the College of Cardinals less than three months ago, Cardinal Onaiyekan, 69, downplayed the media’s focus on some cardinals reportedly being concerned about the findings of an internal investigation of charges of corruption and financial mismanagement within the Vatican. Retired Pope Benedict XVI said the dossier compiled by a three-cardinal commission should be seen only by the next pope.

Cardinal Onaiyekan said, “I do believe that very often there’s a tendency to exaggerate the gravity and even the moment (importance) of the problems we have in our house today. Anyone who has read church history knows that there is nothing new on that.”

Problems or accusations of scandal or corruption should be addressed, he said, “but that only proves that the church is made of human beings.”

“Jesus Christ could have left this church in the hands of angels; there were enough in heaven to do the job,” he said.

Instead, with his love and hope for humanity, he put the church in the hands of 12 ignorant men, who included simple fishermen and a tax collector, he said.

He said the church shouldn’t be concerned with being “credible,” in the sense of its message being believed or accepted by everyone.

“You can’t be credible to everybody. Authentic, yes, but authentic means a message that is as close as possible to the message of Jesus; that I’m worried about,” he said.

“The church cannot go around, obviously, all the time trying to be popular, to be acceptable” to the views, positions and opinion of journalists and the dominant culture, he said.

But that “doesn’t mean that we go out of our way to be difficult to understand, no. We do our best to explain as much as we can” and face the challenge of making the message seem as relevant as possible.

March 8, 2013 Here's an idea for how to pick the pope...
Browse Our Archives
get the latest from
Catholic
Sign up for our newsletter
POPULAR AT PATHEOS Catholic
1