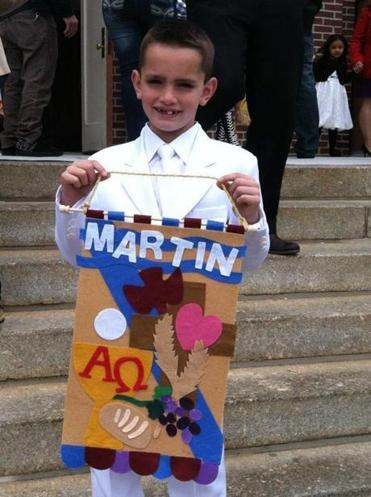 This image, from Facebook, appears to be his First Communion picture. Details:

The 8-year-old boy killed in the explosions at the Boston Marathon has been identified as Martin Richard, The Boston Globe reported.

The boy was at the event to watch his father race, according to TV station WHDH.

Richard’s mother and 6-year-old sister were recovering in a hospital after suffering serious injuries, the TV station reported. It said the boy’s mother underwent surgery for an injury to her brain and his sister lost a leg in the explosion.

Neighbor Jane Sherman told WCVB that Martin was a typical little boy, who loved to ride his bike and play baseball.

Martin’s mother, Denise, was hospitalized with “grievous injuries,” The Times of London reported. She reportedly underwent surgery late Monday for an injury to her brain.

His 6-year-old sister, a first grader whose name was not made public, lost her leg in the blast, WHDH reported.

The status of his father, William, has not been released. A third child was reportedly unharmed in the explosion.

From the Boston Globe:

This morning, no one was at home at the Richard house, which was watched over by a Boston police officer parked in a cruiser nearby.

At the end of the driveway, someone had written the word, “Peace.’’

Emira Myers came with her mother, Jacqueline, to the family’s home and left a small stuffed animal on the family’s porch, which is starting to be filled with flower bouquets and other stuffed toys.

Emira, who is 10 years old, said she attends the same charter school as Richard, but was not in the same class as him. Holding close to her mother, she described him as happy little boy.

Asked by reporters how she was feeling, the 10-year-old responded: “Scared.’’ She added, “I don’t know where they are.’’

Her mother said Emira was referring to the people who attacked the marathon.

April 16, 2013
Chaput on being archbishop of Philadelphia: "I haven't liked it at all"
Next Post

April 16, 2013 Pope Francis prays that "all Bostonians will be united in a resolve not to be overcome by evil"
Browse Our Archives
Follow Us!