His story, and why he did it, from the Chicago Tribune:

Just days after crossing the U.S.-Mexico border by climbing a wall, a Chicago priest said Sunday that what he did was wrong and urged parishioners in his Southwest Side church to apologize if they had done the same. 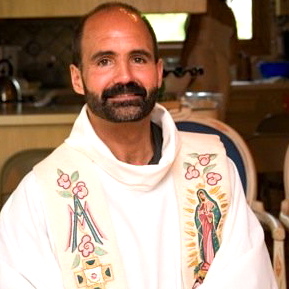 “And by recognizing you did something wrong, you can’t keep doing it,” said the Rev. Gary Graf of St. Gall Roman Catholic Church in Chicago’s Gage Park neighborhood. “I’m begging the people to take a different tactic.”

After speaking to a packed Sunday morning Mass, Graf said he traveled to Mexico this month with the intention of returning to U.S. soil by scaling a 20-foot iron wall.

The 54-year-old pastor, a U.S. citizen, said he wanted to understand what many of his Hispanic parishioners went through. Now that he does, he feels it’s important they make amends for their actions by having a conversation with U.S. citizens about it.

With only his backpack, Graf flew to Tucson, Ariz., almost two weeks ago and then rode a bus to Mexico. Graf paid for the trip but took about $3,000 from a church collection to paycoyotajes, or people who smuggle others into the U.S. for a fee.

He spent three days in a home with 27 people waiting for smugglers to take him to the U.S. before abandoning his plan. Graf said he then hitched a ride and walked hours through the desert until he came to the border.

At nightfall Wednesday, Graf said he sat, prayed and looked at the fence for about an hour before climbing it. He thought he’d get arrested as soon as he landed on the other side, in Nogales, Ariz., but didn’t see anyone around.

April 29, 2013 Report: priest who admitted to groping teenager continues to work with children
Browse Our Archives
get the latest from
Catholic
Sign up for our newsletter
POPULAR AT PATHEOS Catholic
1