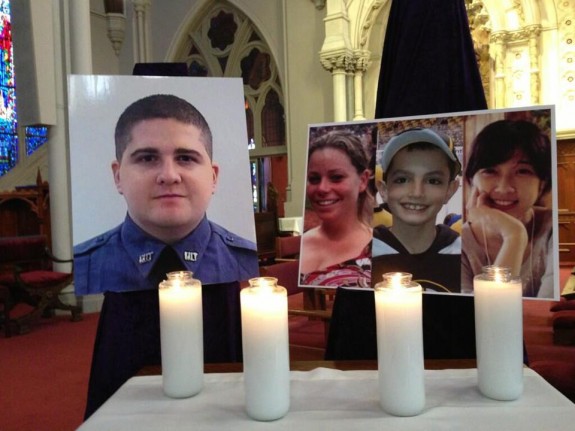 Boston’s Catholic archbishop marked the city’s renewed sense of community after the marathon bombings but warned of the “culture of death” that led to the tragedy, calling on the faithful to “build a civilization of love.”

At the Cathedral of the Holy Cross, Cardinal Sean P. O’Malley offered Sunday’s Mass, which was attended by the city’s police commissioner, “for the repose of the souls” of those who died as a result of Monday’s bombing and the manhunt for its alleged perpetrators.

In his homily, O’Malley said it was difficult to understand “what demons were operative” in the minds of brothers Tamerlan and Dzhokhar Tsarnaev or their politics “or the perversion of their religion.”

After reflecting on aspects of the lives of the Tsarnaev brothers that have been reported, O’Malley said that the “individualism and alienation of our age has spawned a culture of death.”

He decried actions that “have coarsened us and made us more insensitive to the pain and suffering of others,” citing abortion as “just one indication of how human life has been devalued,” as well as violence in entertainment. He also chastised Congress for its inability to pass stricter gun control laws, calling it “emblematic of the pathology of our violent culture.”

“It is only a culture of life and an ethic of love that can rescue us from the senseless violence that inflicts so much suffering on society,” he said.

O’Malley also told hundreds who attended the 11:30 a.m. service that they should be people “of reconciliation, not revenge,” and that the Tsarnaevs’ alleged crimes should not be justification for prejudice against Muslims and immigrants.

Speaking with reporters after the Mass, O’Malley said he would oppose the death penalty for Dzhokhar Tsarnaev, who is now hospitalized after a standoff with police that ended in his capture Friday night.

“Forgiveness does not mean that we do not realize the heinousness of the crime. But in our own hearts when we are unable to forgive we make ourselves a victim of our own hatred,” he said. “Obviously as a Catholic I oppose the death penalty, which I think is one further manifestation of the culture of death in our midst.”

The complete text of the cardinal’s homily can be found at Catholic TV’s Facebook page.

April 21, 2013
Pope Francis at priestly ordinations: "You are pastors, not functionaries"
Next Post

April 21, 2013 Moving on from screaming babies: how about wandering children?
Browse Our Archives
get the latest from
Catholic
Sign up for our newsletter
POPULAR AT PATHEOS Catholic
1