Former deacon sentenced to jail for stealing from collection plate

Joseph Thomas Finnigan, the 73-year-old Catholic deacon who admitted stealing $120,000 from Grand Haven collection plates over some five years, will spend the next year of his life in jail and the rest of his life trying to pay back the money. 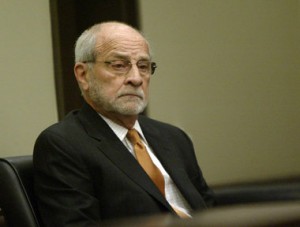 The sentence was within state sentencing guidelines, which called for a minimum incarceration of between zero and 17 months.

Hulsing also placed Finnigan on probation for four years, ordered him to serve 250 hours of community service and pay restitution of $120,000, minus $2,500 Finnigan has already paid. He also must pay fees and costs…

…Finnigan had worked at St. Patrick’s Catholic Church in Grand Haven for 11 years before being terminated as an ordained deacon in November 2012, when the thefts came to light. Finnigan admitted stealing money from church collection plates between 2007 and 2012, according to Miedema.

Noting that Finnigan in a letter to the court had called his crimes “an irrational act,” the judge said to him in court, “this was not an irrational act. This was a series of acts you made over a series of years … for financial gain. It’s not as if you had a bad day.”

Hulsing said the forensic accountant hired by the church after the thefts came to light concluded that Finnigan “deliberately and painstakingly… (evaded) internal controls,” taking a great deal of effort to conceal his larceny.

Acknowledging that he had received numerous letters supporting Finnigan by pointing out his good works and his worth as a husband, father and grandfather, Hulsing said: “It has also been said that an individual’s true character is revealed in what they do when they think no one is watching.”

Speaking before the sentencing, the Rev. Bill Langlois, pastor of St. Anthony and St. Patrick’s Parish, told the judge he felt betrayed by Finnigan.

“I’ve never experienced such a personal betrayal of trust as I have from my friend Joe Finnigan,” Langlois said.

April 30, 2013 Priest collapses, dies while celebrating Mass
Browse Our Archives
get the latest from
Catholic
Sign up for our newsletter
POPULAR AT PATHEOS Catholic
1