From the Miami Herald:

Thirty-three years ago, Mother Teresa of Calcutta came to Miami to put her merciful motto of love into action: “To serve the poorest of the poor.” 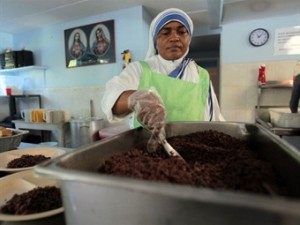 Since then, each morning a group of sisters of the congregation of the Missionaries of Charity, donning their distinctive white blue-bordered saris, passes through the gates of their beloved Overtown convent — where they live without air conditioning, washing machines or television — and cross the street to enter the world of the poor: a soup kitchen founded by Mother Teresa.

On a recent morning, following the Liturgy of the Hours prayer inside a tiny chapel with the image of Our Lady of Fatima, the sisters, accustomed to listening to candid words from grateful men, woman and children, found a notice of violation with a potential property lien from a City of Miami Code Enforcement inspector posted on an electrical pole.

Apparently the sisters had never obtained a permit for feeding — for free and without using public funds — hundreds of homeless who see in their eyes the universal symbol of compassion and dignity represented by Mother Teresa.

“What kind of violation are we doing?” asked convent superior Lima Marie. “Taking care of the homeless and feeding them is a violation?”

The sisters felt intimidated because the notice ends with a threat: operating “a business without all required licenses is illegal under state and city law and is punishable by criminal arrest and/or closing the business.”

With such aggressive language, it is obvious that city government shows no respect toward these religiously devoted women and lacks the basic sensitivity to differentiate between a business without a license and charity work.

“We are not doing any ‘business’ here. We are in ‘business’ of the good,” the sister superior told me in a rare interview. The missionaries shy from the public and the press because they have taken vows of humility and poverty.

“For us,” she continued, “the only mission is to quench the thirst of Jesus on the cross by laboring for the salvation and sanctification of the soul.”

After the City of Miami issued a violation to the Missionaries of Charity for “operating a business without a license,” a lawyer providing legal support said he is confident the city will withdraw the notice.

“The city has full knowledge” of the sisters’ work and has given them “numerous approvals over the years,” attorney Tom Equels told CNA April 4.

“Sometimes they forget so I’m going to do my best to remind them.”

April 6, 2013 Seeking truth: meet the deacon who is a forensic scientist
Browse Our Archives
Related posts from The Deacon's Bench