Creative Minority Report got the scoop:

Alisa Lapolt Snow, the Planned Parenthood lobbyist, who shocked the nation with her defense of live birth abortions in front of a Florida House committee, served on the board of Catholic Charities of Northwest Florida.

Alisa is a graduate of the University of Tennessee where she earned a bachelor’s degree in communications/journalism. She was a founding member and secretary of the Sunset Rotary Club of Tallahassee and serves on the board of Catholic Charities of Northwest Florida-Tallahassee. She is a member of the Florida Association of Professional Lobbyists. 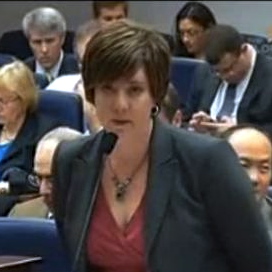 Because I don’t take the word of people from Planned Parenthood on anything, I checked the website and she was not listed on their board of directors.

So I called the Catholic Charities office and they told me that Lapolt-Snow did indeed serve on the board until leaving in January. She didn’t explain further.

April 9, 2013 Pope Francis on the temptation to gossip: "These everyday things happen to everyone, including me..."
Browse Our Archives
get the latest from
Catholic
Sign up for our newsletter
POPULAR AT PATHEOS Catholic
1

Divine Condescension
"The Word became flesh and made his dwelling among us." - John...
view all Catholic blogs
Copyright 2008-2021, Patheos. All rights reserved.