Pope Francis on the “way of humility”

As has become his custom, the pope celebrated daily Mass for a small group of people at his residence this morning, and Vatican Radio has highlights:

For the Christian, “making progress” means “lowering oneself” on the road of humility in order allow God’s love to emerge and be clearly seen. This was the central focus of Pope Francis’ homily on Monday morning at Mass in the Domus Sanctae Marthae chapel. The liturgy was attended by some of the Sisters of Charity, who renewed their vows, the staff of the Vatican Television Center, the Brazilian Program of Vatican Radio, and the long-time Papal photographer, Arturo Mari. 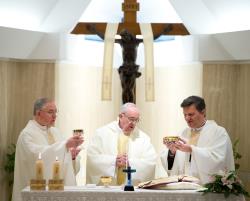 The way of Christian humility rises up to God, as those who bear witness to it “stoop low” to make room for charity. The liturgical feast of the Annunciation occasioned this reflection from Pope Francis, as he celebrated the Annunciation Mass on Monday morning. The Pope said that the road taken by Mary and Joseph to Bethlehem for the imperial census was a road of humility. There was the humility of Mary, who “did not understand well,” but “[entrusted] her soul to the will of God.” Joseph was humble, as he “lowered himself” to take on the “great responsibility” of the bride who was with child.

“So it is always with God’s love,” said Francis, “that, in order to reach us, takes the way of humility.” This was the same way that Jesus walked, a way that humbled itself even unto the Cross. Pope Francis went on to say that, for a Christian, “[T]his is the golden rule,” according to which progress and advancement always come through lowering oneself. “One can take no other road,” he said, adding, “if I do not lower myself, if you do not lower yourself, you are not a Christian.”

Pope Francis went on to say, “Being humble does not mean going on the road,” with “downcast eyes.” Such was not the humility of Jesus, or his mother or his foster father, Joseph. The Holy Father underlined that the way of humility is the one that leads to the triumph of the Resurrection. “Let us ask God for the grace of humility,” he prayed, “that humility, which is the way by which charity surely passes,” for, “if there is no humility, love remains blocked, it cannot go [forward].”

April 8, 2013
A blast from the past: all about Pope Francis' crozier
Next Post

April 8, 2013 RIP: Annette Funicello, Catholic
Browse Our Archives
get the latest from
Catholic
Sign up for our newsletter
POPULAR AT PATHEOS Catholic
1