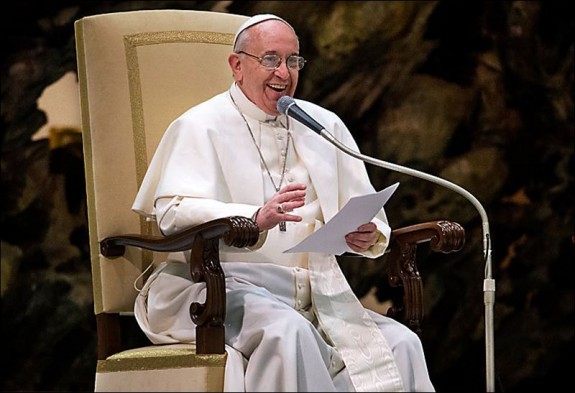 It looks like Pope Francis will be finishing ex-Pope Benedict’s encyclical on faith. The Vatican spokesman, Father Federico Lombardi, said he would not exclude the possibility that Francis’ first encyclical would be issued later this year. The spokesman noted that before his resignation, Pope Benedict had already done initial work on an encyclical to mark the “Year of Faith.”

Father Lombardi also said Pope Francis would continue to reside in the Vatican guest house, the Domus Sanctae Marthae, instead of moving into the more formal (and much larger) papal apartments in the Apostolic Palace. The pope like his room at the guesthouse, and apparently enjoys the relative freedom of movement it offers him.

“At the moment, he doesn’t seem to want to change his lodging, although this is not a definitive decision,” Lombardi said.

Pope Benedict, meanwhile, is still scheduled to move into a monastic building located behind the Vatican Gardens, probably sometime in early May.

There’s more, including news about upcoming travels and a rumor about a document on divorced and remarried Catholics and communion.  Read it all.

April 25, 2013
"The cooler, more welcoming side of the Catholic Church" —UPDATED
Next Post

April 25, 2013 School says lesbian teacher was fired over "spousal relationship," not because she's gay
Browse Our Archives
get the latest from
Catholic
Sign up for our newsletter
POPULAR AT PATHEOS Catholic
1