“The cooler, more welcoming side of the Catholic Church” —UPDATED 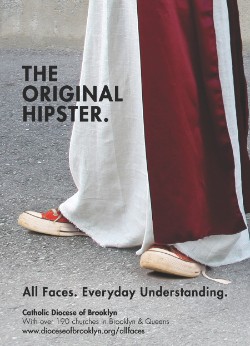 That’s how the Diocese of Brooklyn describes its new ads for “hipster Jesus.”

Ads around Brooklyn bring a new meaning to Joan Osborne’s lyrics, “What if God was one of us?”

In a new ad campaign launched by the Roman Catholic Diocese of Brooklyn this month, people in the borough and neighboring Queens have a new way to view Jesus: “The Original Hipster.”

The ads feature the bottom half of a man – meant to be Jesus – wearing robes with a pair of dirty red Converse sneakers peeking out from the bottom.

In a news release, the diocese refers to Seth Meyers’ joke on “Saturday Night Live” that Converse sneakers are why more Catholics are returning to the church, and says the marketing campaign is “showing a cooler and more welcoming side of the Catholic Church.”

Brooklyn’s Williamsburg neighborhood, near Queens, is considered to be the “unofficial East Coast birthplace of hipsterism,” as a 2012 article in Forbes put it.

Monsignor Kieran Harrington said he understood the importance of relating to the people of the area.

“Jesus appears (in these ads) like people of the L train,” he said. “What is a hipster anyway? Someone who stands against the (mainstream) culture. Jesus stood against the culture.”

Ten months ago, the conversation started about creating such a campaign to let people know there are a variety of different faces who attend the church.

Harrington says these particular ads were a collaboration with the ad and PR agency Ruckus. Now they are found in places where the church doesn’t usually advertise, including bus stands, restaurants and gyms.

The ads have generated online buzz in Salon, the Gothamist and other sites, and traffic on the diocese’s website has gone up 400%, Harrington said.

UPDATE: The Wall Street Journal has more of the story behind the ad:

Last fall, the Diocese approached Ruckus, a small advertising firm that has also worked on projects with the Westville restaurant chain, Honda motorcycles and Undies.com.

“If you take a look at Brooklyn, it is one of the most diverse places on Earth. And we wanted to let everyone know they were welcome in the Catholic Church,” said Msgr. Harrington, who calls St. Joseph’s in Prospect Heights home. “We took a look at the community that might be most alienated by the church and that was hipsters.”

But hipster wasn’t the original word used by church officials. They told Ruckus that they simply wanted to target young people who are questioning authority—particularly the moral authority of the church.“We want to cut through a lot of the noise and say, ‘Hey, you know what? Jesus Christ is reaching out to you,'” Msgr. Harrington said.

It was the Ruckus team of six, led by Chief Executive Josh Wood, 31 years old, that first threw out the idea of a hipster during a “Mad Men”-style brainstorming session in their offices on West 35th Street in Manhattan. “We were tossing around ideas and talking about the concept of Jesus walking around as your everyday New Yorker, and someone on the team just started talking about him wearing Chuck Taylors, and it evolved,” Mr. Wood said.

The Diocese is upfront about the fact that it wanted an ad that would make some noise.

April 25, 2013 Pope Francis will reportedly complete encyclical on faith
Browse Our Archives
get the latest from
Catholic
Sign up for our newsletter
POPULAR AT PATHEOS Catholic
1 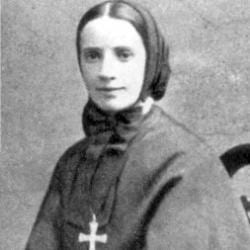 Catholic
'I'm a Roman Catholic...I stand with them': Cuomo...
The Deacon's Bench

We Must Not Become Like Judas, The Apostle...
Judas was an Apostle. He walked with Jesus. He listened to Jesus....
view all Catholic blogs
Copyright 2008-2021, Patheos. All rights reserved.