From the Detroit Free Press: 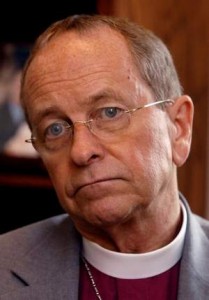 Robinson, who recently retired as Episcopal Bishop of New Hampshire, wrote in today’s Washington Post “On Faith” blog that Catholic leaders such as Vigneron “profane the Sacrament” and use communion as “a manipulative tool” when they say Catholics who support gay marriage should not present themselves for communion.

Vigneron told the Free Press earlier this month that Catholics who support gay marriage should not receive Communion, which Catholics believe is the body and blood of Christ.

Vigneron said those who receive Communion while supporting gay marriage “logically bring shame for a double-dealing that is not unlike perjury.” A Detroit Catholic seminary professor and legal advisor to the Vatican, canon lawyer Edward Peters, also said Catholics who promote gay marriage should abstain from communion.

April 25, 2013 "The cooler, more welcoming side of the Catholic Church" —UPDATED
Recent Comments
2 Comments | Leave a Comment
Browse Our Archives
get the latest from
Catholic
Sign up for our newsletter
POPULAR AT PATHEOS Catholic
1