‘Think about what we are getting used to’ 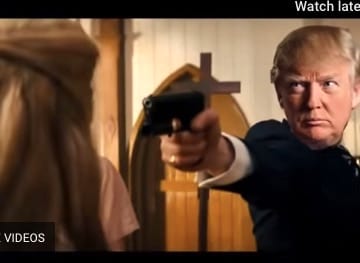 Have we lost our ability to be shocked?

Rod Dreher thinks so, and poses another question:

What is wrong with this country?

A video depicting a macabre scene of a fake President Trump shooting, stabbing and brutally assaulting members of the news media and his political opponents was shown at a conference for his supporters at his Miami resort last week, according to footage obtained by The New York Times.

Several of Mr. Trump’s top surrogates — including his son Donald Trump Jr., his former spokeswoman Sarah Huckabee Sanders and the governor of Florida, Ron DeSantis — were scheduled to speak at the three-day conference, which was held by a pro-Trump group, American Priority, at Trump National Doral Miami. Ms. Sanders and a person close Mr. Trump’s son said on Sunday that they did not see the video at the conference.

The video, which includes the logo for Mr. Trump’s 2020 re-election campaign, comprises a series of internet memes. The most violent clip shows Mr. Trump’s head superimposed on the body of a man opening fire inside the “Church of Fake News” on parishioners who have the faces of his critics or the logos of media organizations superimposed on their bodies. It appears to be an edited scene of a church massacre from the 2014 dark comedy film “Kingsman: The Secret Service.”

Dreher posted the video. It’s every bit as repellent as you can imagine. I watched the first 30 seconds and couldn’t stomach any more.

In this clip made by a Trump supporters, the president not only “kills” abstract representations of media organizations, but images of real people — politicians and celebrities — who are critics of Trump.

Do we need to see a “fun” clip in which the President of the United States kills his predecessor?

Monday morning, there was this response from the White House:

Re: the video played over the weekend: The @POTUS @realDonaldTrump has not yet seen the video, he will see it shortly, but based upon everything he has heard, he strongly condemns this video.

Late Sunday, those behind the event distanced themselves from the video:

The organizer said in a statement on Sunday that the clip had been played at the conference, saying it was part of a “meme exhibit.” He denounced the video and said his organization was looking into how it was shown at the event.

“Content was submitted by third parties and was not associated with or endorsed by the conference in any official capacity,” said the organizer, Alex Phillips. “American Priority rejects all political violence and aims to promote a healthy dialogue about the preservation of free speech. This matter is under review.”

Nonetheless, Dreher concludes with this:

Just a few years ago, the idea that a video depicting the POTUS committing mass murder of media organizations and his political and pop cultural opponents would be played at a conference of his supporters — well, it would have been unthinkable. And there it was this weekend.

Think about how twisted that is. Think about what we are getting used to.

This has been coming for a while. As a reader noted, this phenomena begins with abusive, tasteless, even blasphemous language — thank you President Trump and Beto O’Rourke — and ripples out from there. (Remember Kathy Griffin?) A cancer is spreading.

What sort of people find these things funny? Who thought it was a good idea to show this at a gathering for the president’s supporters at his resort? What does this say about us?

Catholics cannot let this just slip by. Attention must be paid. It’s worth remembering: October is Respect Life month. If we stand for life, we need to stand against everything in our culture that degrades it, diminishes it or mocks it.  We are making the unacceptable acceptable. Where will it end?

Rod Dreher put it succinctly: think about what we are getting used to. 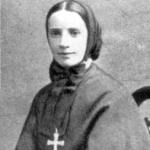 October 14, 2019 'I'm a Roman Catholic...I stand with them': Cuomo backs funding for Cabrini statue
Browse Our Archives
Related posts from The Deacon's Bench