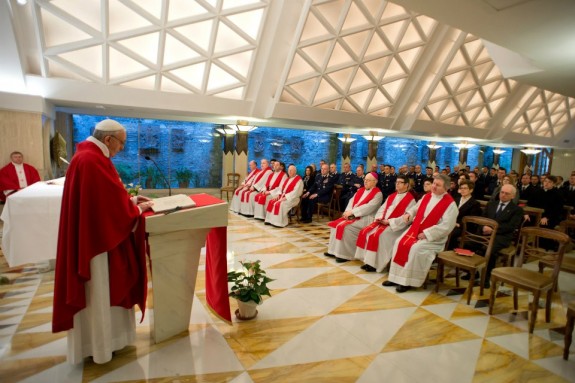 It came up yesterday during his homily (which, appropriately, included a mention of the first deacons):

To solve the problems of life it is necessary to look reality in the face, ready like the goalkeeper of a football team to grab the ball whatever side it comes from. And without giving in to fear or to the temptation of complaining, because Jesus is always beside every human being, even and especially in the most difficult moments. Pope Francis said this at the Mass he celebrated on Saturday morning, 13 April, in the Domus Sanctae Marthae Chapel.

Among those participating were Domenico Giani, Director of Security Services and Civil Protection, with his relatives, officers of the Gendarmes Corps and of the Fire Brigade, Mons. Alfred Xuereb’s mother and several disabled people who were taking part in a Vatican congress.

In the passage from the Acts of the Apostles (6:1-7), proclaimed in the First Reading, “there is ”, the Pope explained — a piece of the history of the Church’s early days: the Church was growing, the number of disciples was increasing”, but “it was at this very moment that the problems arose”. Indeed, “those who spoke Greek murmured against those who spoke the Hebrew language because their widows were neglected in the daily distribution. “Life”, he continued, “was not always calm and beautiful”, and “the first thing they do is to murmur, to gossip about each other: “But look, the thing is …”. But this does not lead to any solution”.

“The Apostles,” on the contrary, “with the help of the Holy Spirit, reacted well. They summoned the group of disciples and spoke to them. This is the first step: when there are difficulties, it is necessary to examine them closely, to take them up and to talk about them. Never hide them. Life is like this. Life must be taken as it comes, not as we would like it to come”.

“It is,” the Pope said, using an effective metaphor that is dear to him “a little like the goalkeeper of the team, isn’t it?  He grabs the ball wherever it comes from.  This is the reality”.” Thus the Apostles “spoke to each other and came up with a lovely proposal, a revolutionary proposal, for they said: ‘but we are the Apostles, those who Jesus chose.’  However, that was not enough. They realized that their first duty was to pray and to serve the Word. “And as for the daily assistance to widows, we must do something else”.

This is “what the deacons decided to do”.

Pope Francis ended his homily with the invitation to ask “the Lord for this grace: not to be afraid, and not to use cosmetics on life”, in order to be able “to take life as it comes and to try to solve the problems as the Apostles did. And also to seek the encounter with Jesus who is always beside us, also at life’s bleakest moments”.

April 13, 2013
Our surprising pope continues to surprise
Next Post

April 14, 2013 Why O'Malley?
Browse Our Archives
Related posts from The Deacon's Bench

Defense of Immortal, Conscious Souls (vs. Lucas Banzoli):...
16. Sheol (Hades): Merely the "Grave" or "Underground" or the Conscious Abode...
view all Catholic blogs