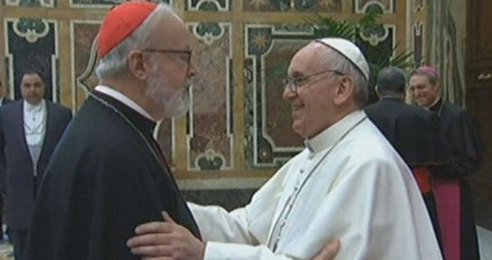 Rocco has some very good answers, including one many observers have missed: the two men just like each other.

Asked the day after the election whether it’d be “fair to say you know [Bergoglio] very well,” O’Malley answered with one word:“Yes.”

Again, it’s not a claim every Stateside elector could make – in reality, LA’s retired Cardinal Roger Mahony and Washington’s emeritus Cardinal Theodore McCarrick are perhaps the only other porporati statiunitense who could claim something of a friendship with the now-Pope.

The key, of course, is that the trio have each maintained an intense focus on and involvement in the Latin American church over the course of their decades-long ministries as bishops, giving them an intimate knowledge of the scene and all its many players.

In O’Malley’s case, it wasn’t just a matter of personal disposition – the now cardinal’s first assignment as a bishop, in the Virgin Islands (1984-93) placed the founder of the capital’s Centro Catolico Hispanoin a Latin-dominant ecclesial sphere. Along the way, there was something that would be a keen tie-in to today’s news: among the few prelates from outside New England who O’Malley invited to his scaled-back installation in Boston in 2003 – only one of two cardinals in attendance on the day – was Oscar Rodríguez, one of his closest friends on the wider scene, now the “coordinator” of Francis’ super-group.

Given his savvy and wide swath of connections, Rodríguez is believed to have been the discreet “driver” behind the significant first-ballot showing for Bergoglio – largely the product of a cohesive Latin American bloc – which suddenly launched the Argentinian Jesuit onto this Conclave’s map, culminating with his election in an astonishingly rapid five ballots.

In his first comment since this morning’s nod, during a cameo appearance on the Italian news-channel TG24, the Honduran said that the group’s remit would include advising Francis on the fate of the ever-controversial Institute for the Works of Religion – the “Vatican Bank,” which several allies of the new Pope have intimated that Papa Bergoglio will likely aim to close.

Beyond the geographic ties, the Bostonian and Bergoglio have a natura lsimpatico on the personality side, reflected most prominently in their shared preference for simplicity and concern for the poor. In Buenos Aires for a working trip, O’Malley had a “very personal, very informal” visit with the then-cardinal in 2010, spending time with Francis in the Chancery apartment he had taken in lieu of the archiepiscopal residence.

The day after the election, the Capuchin recalled the gift Bergoglio gave him: a copy of the Misa Criolla – the Argentine Mass-setting composed in the 1960s – calling it “a great CD that I enjoy very much.”

Given Ariel Ramirez’s emphasis on piano, guitars and tambourines in his vernacular liturgy, perhaps it’s stating the obvious that not every American red-hat would share a similar affinity for the piece.

There’s much more that sheds light on this historic move. Read it all.

April 14, 2013 Parish plans to rededicate memorial to sex abuse victims after it was vandalized
Browse Our Archives
Related posts from The Deacon's Bench