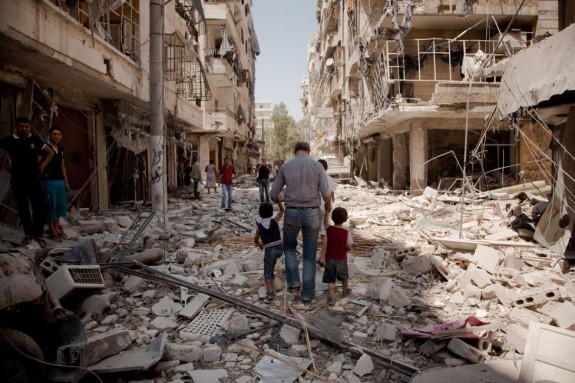 Reuters reports that “a Syriac member of the opposition Syrian National Coalition, Abdulahad Steifo, said the two men had been captured when Ibrahim went to collect Yazigi after he crossed into rebel-held northern Syria from Turkey.”

Several prominent Muslim clerics have been killed in Syria’s two-year-long uprising against President Bashar al-Assad, but the two bishops are the most senior church leaders to be caught up in the conflict.

A Syriac member of the opposition Syrian National Coalition, Abdulahad Steifo, said the men had been kidnapped on the road to Aleppo from the rebel-held Bab al Hawa crossing with Turkey.

Ibrahim, who is familiar with the route and had crossed there several times before, had gone to collect Yazigi and the two men were driving to Aleppo when they were kidnapped, Steifo said.

Asked who had kidnapped them, Steifo said: “All probabilities are open.”

Pray for all concerned—and pray, especially, for their safe release soon.

Below is an interview with one of the men kidnapped that was conducted last year.

April 23, 2013 Ordination update: 18 new deacons for Jefferson City
Browse Our Archives
get the latest from
Catholic
Sign up for our newsletter
POPULAR AT PATHEOS Catholic
1

Hope Without Limits
“Blessed is the man who trusts the LORD, whose hope is the...
view all Catholic blogs
Copyright 2008-2020, Patheos. All rights reserved.